I guess I was not exhausted enough to sleep after getting to bed at midnight last night; I was awake until about 3 am and up at 5:30. So very frustrating. One of the little details that we were not told ahead of time is that though technically we are on a cruise ship, we are not actually cruising until late tonight. Really strange itinerary! We are to spend the day docked in Yichang.We signed up for a trio of shore excursions during the 4-day Yangtze River cruise and so will at least get off the boat for a few hours to tour the 3 Gorges Dam, the largest river dam in the world. There are quite a few boats docked here – they are parked three across. In order to get to our ship, we have to walk through another one!

All meals on the ship are served buffet style.The buffet was a huge step down in quality from the Marriott; we were spoiled there. There were minimal western food choices and the quality of the ingredients was a little subpar. For example, the juice had been heavily watered down and so was nothing more than flavored water. Trying to get food at the buffet was frustrating as well. The majority of the passengers onboard are local Chinese people. A major cultural difference is that the Chinese tend to be quite pushy. I am not trying to be racist; it is a simple fact of life, shared by our tour guide to explain some of the behaviors that we will experience on the tour. 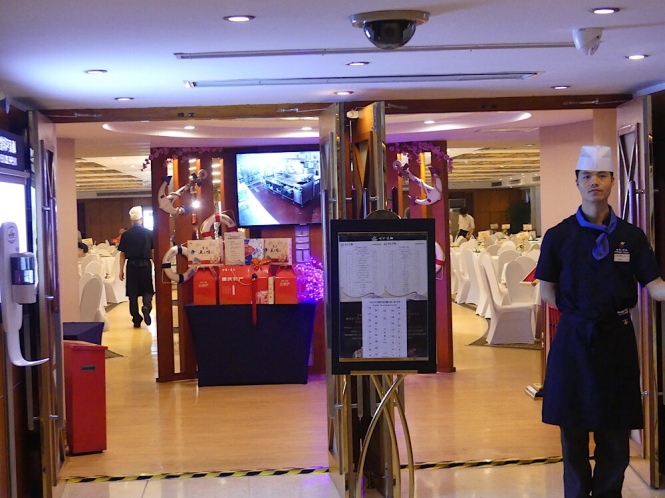 We were told that our tour group would have an exclusive lounge that only we could access. This turned out to be untrue as the lounge seemed to be shared by multiple tour groups. Not that big a deal, but having a peaceful retreat on the hectic, loud ship would have been nice. We do have access to coffee and cookies any time we want them as well as free wi-fi, though of course, access to anything Google or Facebook is blocked.

After lunch we met up with our group for a tour of the big dam here. Though our group had its own bus, it turned out that virtually everyone on the ship was taking the same tour, which meant that 300 people were all trying to leave the ship at the same time. Normally this would not be that big a deal but in order to exit the ship, we had the walk through the ship docked right next to us, line up for the cable car up the hill (or walk up) and then take the cable car. We were given special boarding passes to wear around our necks so that we could get back on the ship when we returned. We also had to bring our passports with us because each time we exit the ship, we have to go through security when we return.

We have been spoiled so far with having two excellent guides – Rose (our tour manager) and Sean (local guide for Shanghai). Our guide for the afternoon was Annie, who had a very loud, grating voice. She was quite enthusiastic about the dam. Part of the script was an attempt at making multiple double entendres using the word dam (damn). It seemed a bit forced, but I was really tired and a bit crabby, so maybe it was just me.

The drive to the dam was approximately 40 minutes. We were given all types of facts and figures about the dam. I wrote down a few but I doubt you would find them any more interesting than I did, so I won’t bore you with them. Suffice it to say that the dam is enormous and has saved many people here because there is no longer yearly flooding. Annie told us that a million people drowned here over the past century before the dam was built.

The city of Yichang itself is a “relocation city”. Any time the Chinese government needs your home for whatever purpose, you get relocated (whether you want to be or not). I imagine for the farmers that got relocated that being moved to the city was quite a change of lifestyle.

Our tour consisted of several stops. The first was a big security check. We were given tickets and told to take all of our belongings off of the bus.We had to get scanned and wanded before reloading the bus.There was also time for a “happy room” stop. Yes, the Chinese call the restroom the same thing as the Vietnamese do! Most of the toilets here are of the squatty potty variety though there is typically one western toilet. Of course most of the women in our tour group want to use the western toilet so there is always quite a wait.

We drove a short distance to the visitor center which is basically a souvenir shop with a model of the dam built into the side of the building. It does give a good perspective of how all of the parts work together. It took 50,000 people to build the dam, locks, and ship elevator. The Chinese people were heavily taxed to pay for it. Rose told us that the tax doubled her electric bill from 2004 to 2015 when the dam was finally paid off.

Larger ships must pass through the locks which is free but can involve a wait of up to 2 weeks. The actual time to go through the set of 5 locks is about 4 hours. Smaller ships can pass through using the ship elevator which only takes 40 minutes. 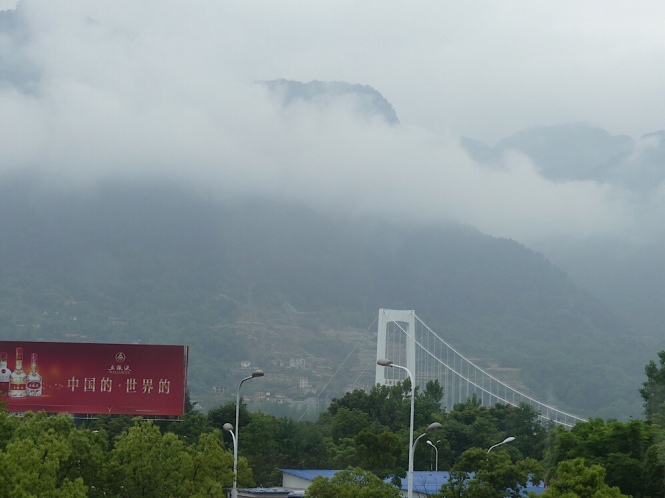 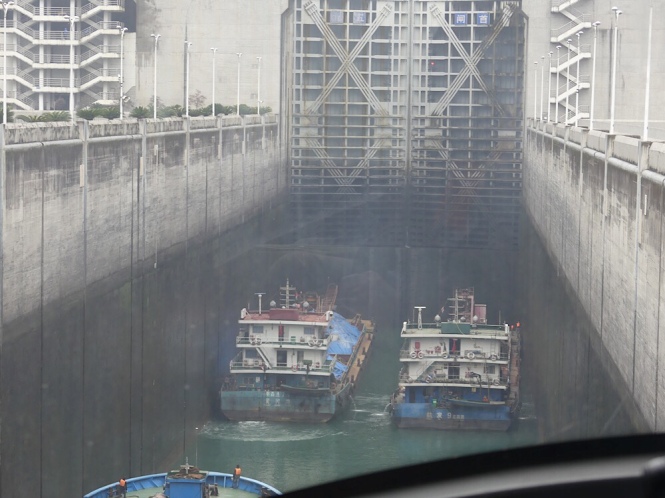 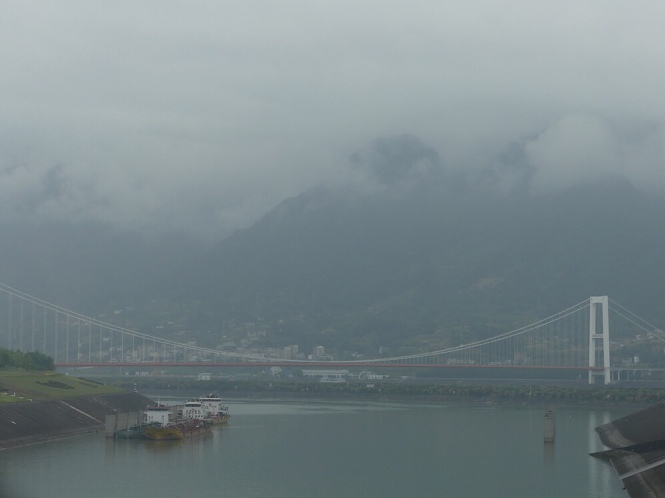 A series of escalators takes you up a hill to a viewpoint where you can see the entire dam complex. We were given about a half hour to wander around and take pictures. Clayton spent his time photo bombing some of the local people visiting while I took a few pictures. 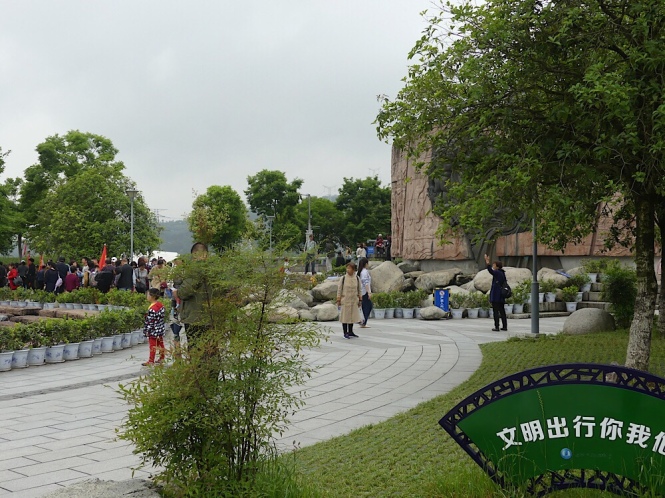 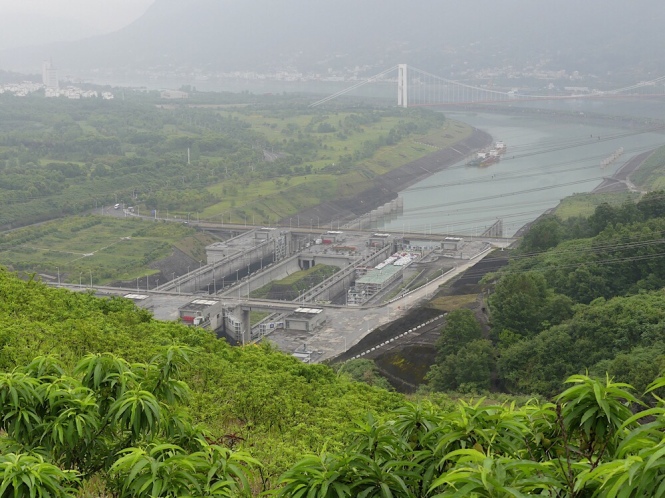 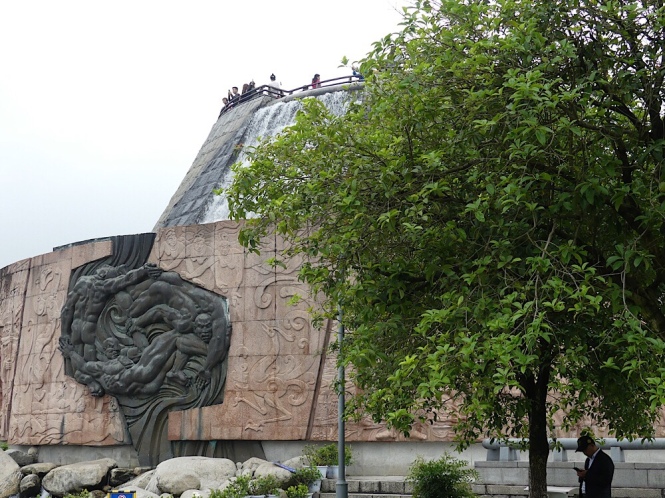 We took escalators down the other side of the hill and stopped to take pictures of the locks. The viewpoint there wasn’t actually very good and the locks weren’t really any different than any others we have seen, so I didn’t take pictures there. 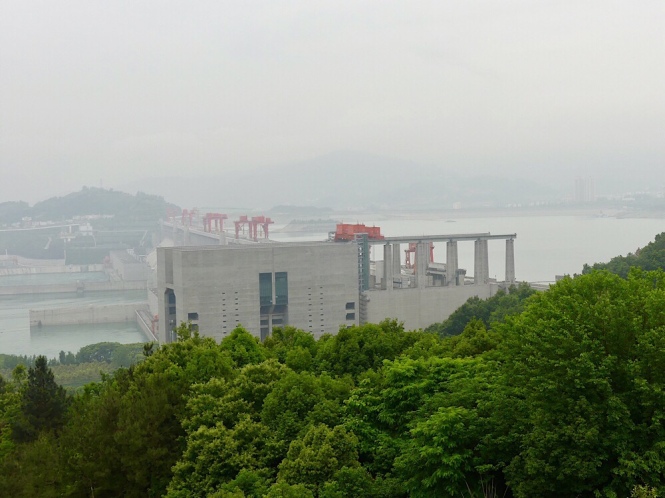 We continued our walk down to the ship elevators which is where our bus was parked. Again, all you could really see was concrete pillars; it was not possible to see any of the mechanisms or anything interesting, so we went to the bus to wait for everyone else to return before we could head back to our ship.

Fortunately, Annie had told us everything she needed to about the dam so we were able to ride back in peace. We walked to the ship rather than riding the cable car and were able to pass through security pretty painlessly. Our security badges were collected after we walked through the neighboring ship and we returned to our cabin to relax until dinner.

Dinner was pretty good – better quality and variety of food than breakfast or lunch. There was a Captain’s Welcome Party this evening. We were told to dress up for it. We didn’t go but since it took place on the deck above us, were able to “enjoy” the loud music until it stopped about 10 pm. At that point we were finally able to get to sleep. The ship finally departed about the same time – we are finally cruising!