Our tour today once again proved that having a good tour guide truly makes or breaks a tour. Several groups on Cruise Critic had booked tours with the same company. We had booked the standard tour which included the Chapel of Peace, Diego Rivera Wall Mural, Flamingo Hotel, Folk Art/Craft Shop and the world famous Cliff Divers. The other groups had also added lunch and a baby turtle release.

Unlike the mess getting off the ship in Nicaragua, no one was lined up to get off the ship in Acapulco; my husband and I were first off. We found Sebastian, the owner of the tour company that I had been corresponding with. We let him know that the other couples would be joining us shortly; he left us to go talk to his other guides. Within a few minutes, the other couples were there. However, I could not locate Sebastian! I eventually found him and let him know we were ready to go. He fetched the van and drove it around to pick us up.

First issue – the air conditioning in the van was virtually non-functional. Air was coming through the vents, but it was definitely not cold air. When the outside temperature is in the high 90’s and humid, being able to cool off between stops is critical. He told us the itinerary for the day which somehow included lunch and the turtle release. I was thinking he decided to add in those items because the other groups had added them. No problemo!

We drove to the Flamingo Hotel. It is famous mainly because it was owned by John Wayne and Johnny Weissmuller and was quite popular with the Hollywood set back in the day. I assumed we would take a few quick pictures and be on our way. No such luck. Sebastian sold everyone on the Coco Loco drink ($11). He said it would take a few minutes to get the drinks made because they hollow out a coconut to serve them in. We didn’t order one but everyone else in the group did. As we sat and waited in the heat, the other two tour groups came through. One of them sat down for drinks, the other just walked through and left. The group that sat down got their drinks first. Our group eventually got their drinks. While they were drinking their coco loco’s, Sebastian offered us a couple of free coco loco’s. They were in glasses rather than coconuts which was fine with me! The Flamingo is now used as a hotel; Sebastian said it is a retirement hotel. He said that means that retired people stay here for 6 months during the winter. I’m not sure this place would be my first choice if I were staying in Mexico for the winter; maybe it’s really inexpensive. 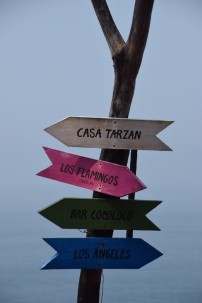 We finally left the Flamingo and loaded back into our really hot van. Sebastian did offer unlimited cold beer and water on the tour so that helped a little bit. We drove by the Diego Rivera mural. Diego created it for his lover, Delores (Lola) Olmedo. He explained the symbolism to us. We took pictures through the windows of the van. 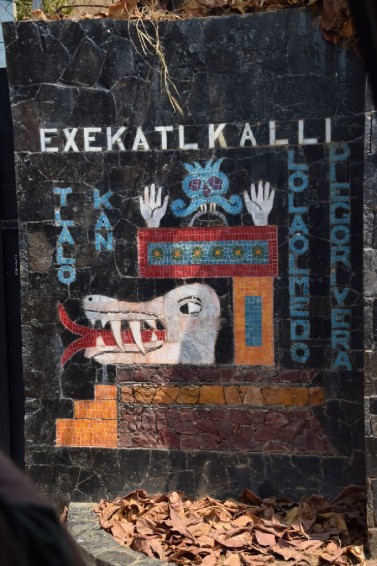 By now the couples in the back of the van were so hot and uncomfortable that they were ready to mutiny. Sebastian offered to put them in one of the other vans so when we made our stop at the Arts/Crafts Market (aka souvenir stalls) they switched over to a van with better air conditioning. We sat in the hot sun at the market for a very long time. Sebastian had vanished and the other people on the van were apparently doing quite a bit of shopping. A taxi driver came up to talk to us while we waited; he told my husband that I looked like Liza Minelli. He gave us his card just in case we returned to the area or wanted to pass his information along to our friends. He was a nice guy and we enjoyed talking to him. Finally, Sebastian reappeared and we drove to the “main event” of the day – the cliff divers. 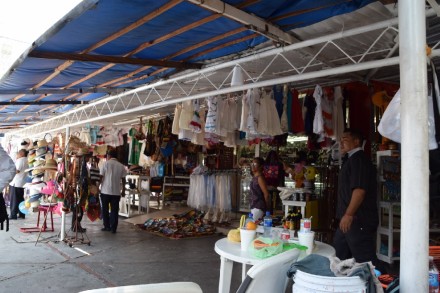 The show was supposed to start at 1 pm but we got there late. Fortunately, the show was running late, too, but all of the good viewing spots were already taken. The divers climb up the rock wall to a height of 129 feet before diving off the cliff. At the top of the wall are a couple of altars. Each diver said prayers and kissed the altar before completing their dive. They dive into a narrow channel which is only 16-22 feet deep. The cliff is not vertical so they have to throw themselves away from the wall as they dive. The cliff diving started in the 1930’s and 1940’s by local fisherman. They would dive off the cliffs as acts of bravery, trying to outdo each other by diving from higher and higher locations. It was very, very impressive! 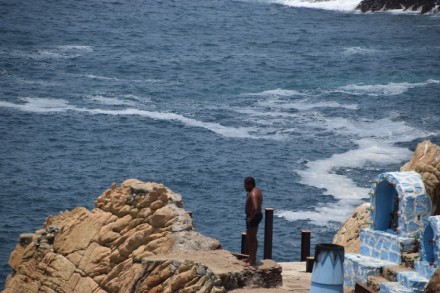 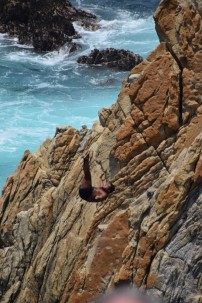 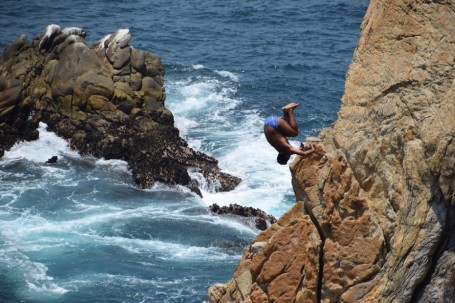 After the show we waited and waited for Sebastian to show up. Our friend, the taxi driver from our last stop stopped by to ask us for $20 US. I guess he was being friendly before so we would be more inclined to help him out? Anyhow, when we did find Sebastian he said that he had been waiting for us somewhere else. Hmmm. Anyhow, I wanted to clarify what was going on with the tour. It was already time for us to be returned to the ship and we still had not seen the turtles or had lunch. I asked him when we would be back to the ship; he said 4 or 5 pm! We were supposed to be back by 2, so was a bit confused. And, a bit overheated. And, a bit ticked off. He either was honestly thinking that we had booked the deluxe, full-day tour or was trying to upsell us. Either way, we were not interested in spending a few more hours in that hot van. I told him that we had not signed up for a full day tour and that we wanted to be taken back to the ship. The other couples wanted to see the turtles and do lunch but they were already moved to the better van so no problem. The remaining five of us headed back towards town. 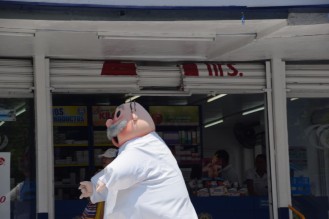 We still had not seen the Chapel of Peace so headed in that direction. Along the way, two of the ladies decided that they really did want to do lunch and see the turtles so we had to drive through the congested traffic to drop them off. One of their husbands, my husband and myself were left in the van. We told Sebastian to skip the Chapel of Peace and take us back to the ship. He knew we weren’t too thrilled with how the day had gone and offered us a discount on the tour. We paid him full price; it was our decision to skip the last stop.

As you can probably sense from my post, we weren’t too thrilled with this tour. Sebastian’s timing at each stop was poor; he spent much of his time on the phone communicating with his other drivers or off away from the group. He didn’t give us as much history and cultural information as we typically get from our tour guides, either. We could’ve lived with all of that; the biggest problem was the poor air conditioning in the van. It really made for a miserable day. The following day I ran into a couple that was in one of the other vans; they said they had the best tour ever with Roberto (co-owner of the company). I’m glad others had a good experience but we were not so lucky.

Our final stop in Mexico is Cabo San Lucas. We will be there day after tomorrow and then will be heading back to the US.