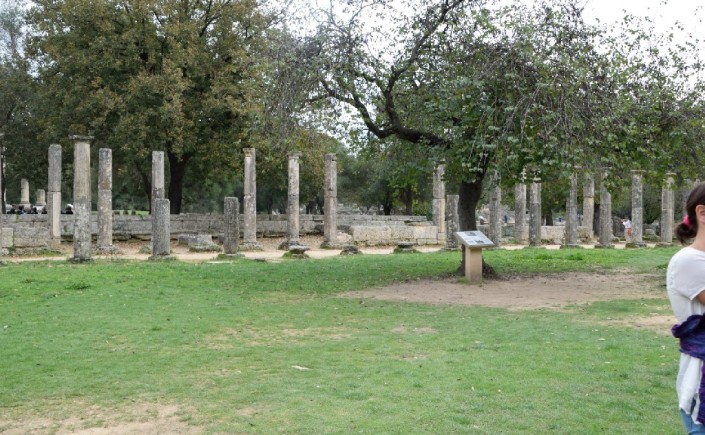 What do you know about the modern Olympic games?  How do you think that compares to what is true about the ancient Olympic games?  Today, we arrived in the port of Katakolon, Greece, but the main point of interest in the area is Olympia, home of the ancient Olympics.  We met up with our group of 8 today.  Sarah, who I had met on Cruise Critic, had arranged the tour through Taxi Katakolo.  I had been emailing Sarah for months and today was the first time we met in person.  Andreas, our driver, drove us to Olympia and dropped us off with our tour guide, Vasilis.  If you ever find yourself in the area, I highly recommend Vasilis as a guide.  He had an engaging personality and a thorough knowledge of the history and archeology of the area (www.guidemeingreece.tours).

There are several legends as to how the Olympic games came to be, but though historians cannot agree on all of the facts, there are some facts that are known.  Just like now, the Olympics were held every four years.  Each athlete came from a particular city-state.  There was a religious character to the games.  Of course, only men could participate; women, slaves, and barbarians (any non-Greek) were forbidden, even as spectators.  The only female that could watch was the Priestess of the Goddess Demetra.

During this time, there was not enough food to support the Greek populace, so the Greeks went abroad to fight for land.  During the games, all war must cease, and for three months following.  The purpose of the games was to bring peace to the land (albeit temporarily).  Olympia was built as a sanctuary, not a city. The games took place from 776 BC to 393 AD.  Eventually, the games were stopped because Christians considered it pagan.  The city was destroyed by an earthquake and buried under 6 meters of mud.  It has been slowly excavated starting in 1830 by the French, who stole much of what they excavated, and then by the Germans who struck a deal that they would excavate for the next hundred years, but only take artifacts of which there were duplicates.

Olympia was divided into three sections:

In the athletic area, there was a gymnasium (a places where athletes trained; naked, of course).  In this area, they trained for foot races, javelin, and discus.  In the Palaistra area which was a large square with an open center, athletes trained in boxing, wrestling, and pagrazio (I know I am spelling this wrong!), which was apparently a sport that combined boxing and wrestling with very few rules. . .basically everything but biting was allowed.  Before wrestling, athletes would anoint their bodies with olive oil (a process called eleothession).  Vasilis showed us a picture of a scraping tool that was used afterward to remove the oil and dust. 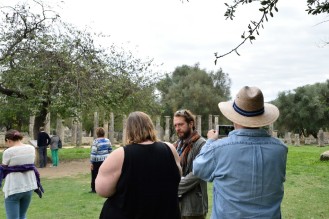 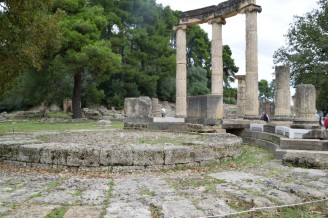 Next, we entered the sanctuary area.  King Phillip wanted to propagandize his victory over the Greeks, so built the temple area to imply that he had Zeus’ blessing.  We walked through this area and saw what remained of the Phillipeion, a round building that had something to do with King Phillip.  There was a temple of Hera, who was Zeus’ wife.  There were Herea Games which were for women, which were also held in Olympia.  Just to prove that Greeks are not sexist, the woman ran naked as well!

We saw the remains of an altar where offerings were left for Zeus.  Now it is the location where the Olympic flame is lit.  Incidentally, the Olympic flame is a modern concept; Adolph Hitler started the tradition.  Sarah noted that apparently, Hitler had one good idea (probably the only one).  To the left of the altar was what used to be a large fountain.  It was built as a bribe by Nymphaeo who wanted his wife to be able to attend the games.  She was introduced as the Goddess Demetra (the only woman allowed to watch), so the bribe worked.  One of the twelve treasuries that held the offerings to Zeus was near the entrance of the stadium. 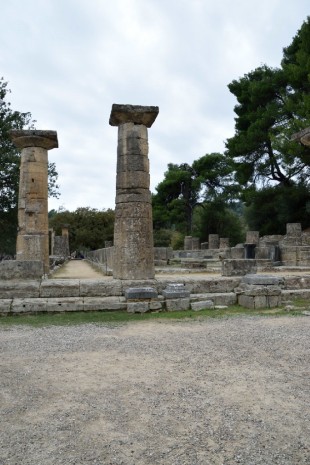 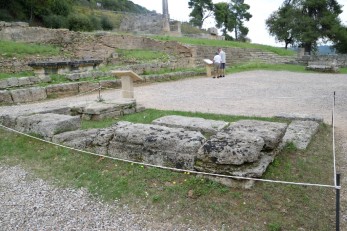 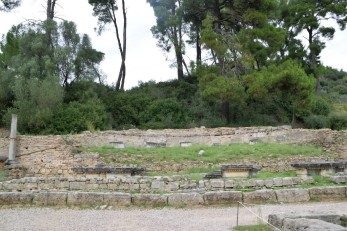 Vasilis told us the legend of Kronos, the God of Time.  Apparently, Kronos ate each of his children as they were born. Mrs. K wasn’t too keen on this idea so when Zeus was born, she tricked him into swallowing a rock instead of Zeus.  Zeus grew up hating his father, so there was a huge battle between Zeus and Kronos at Olympia.  Evidence of that battle is the lightning strikes that are apparent in some of the trees.

When athletes won, they paid for a sculpture to be created in their likeness.  On the base of the statue their name, event, and city-state were engraved.  The richer the athlete, the bigger the statue.  If you sat during the games, you had to erect a statue to Zeus.  This statue was also engraved with your name, but as a mark of shame rather than pride.  Theses statues lined the avenue leading to the entrance to the stadium (good ones on one side; statues of shame on the other).  Incidentally, the Greeks did not put spaces between the letters of their words, which makes reading them a bit challenging.  Our guide read us the information on one of the statues and pointed this out. 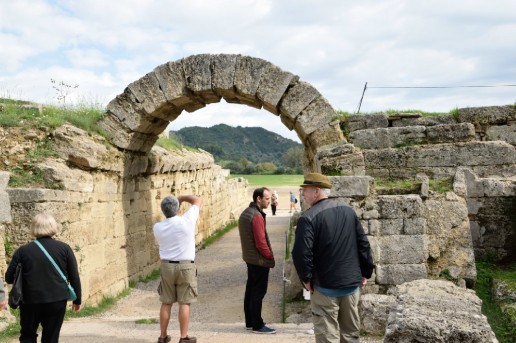 We had now reached the stadium area, which was erected in 776 BC.  The field was 200 meters long by 30 meters wide.  Forty thousand spectators lined the field (no bleachers; seated on the grass).  There were ten judges that were dressed all in red so that they would stand out in the crowd.  The chariot and horse races were held at a stadium that was 5 times larger; this one has not been located yet.  The starting line for the races was a long strip of marble; this is still there.  Another interesting fact:  in ancient Greece, linear measurements were in “stadiums” rather than miles or kilometers (1 stadium = 200 meters). 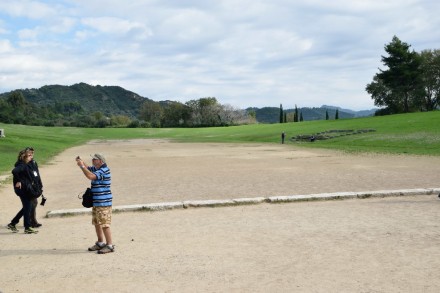 We also heard the legend that one of the athlete’s mothers wanted to watch him compete at the games.  Since women were not allowed, she dressed up as a gymnastic trainer.  When her son won she went to hug him and her robes fell open, exposing the “girls”.  She could have been put to death for her transgression but the priest did not have her killed.  Instead, from then on, trainers were required to enter the arena naked.  Of course, the athletes competed naked.  Naked meant equal; no one was better than anyone else.

Our final stop was the temple of Zeus.  The temple was originally 20 meters tall and was one of the 7 wonders of the ancient world.  The statue of Zeus was 12 meters and made of gold and ivory.  Zeus was holding a gold statue of Nike.  Greeks believed Nike offered victory to athletes.  The modern Olympic medals have Nike engraved on them.  Another piece of symbolism in the modern games is the 5 rings which represent the uniting of the 5 continents.  Remember, the purpose of the Olympics was peace.

The temple of Zeus is believed to have been destroyed by Christians; it was burned to celebrate the Christian God.  There are fragments of the original temple surrounding the temple area.  One 10 meter column still exists.  Picture the statue of Zeus next to this column; it would be two meters taller. 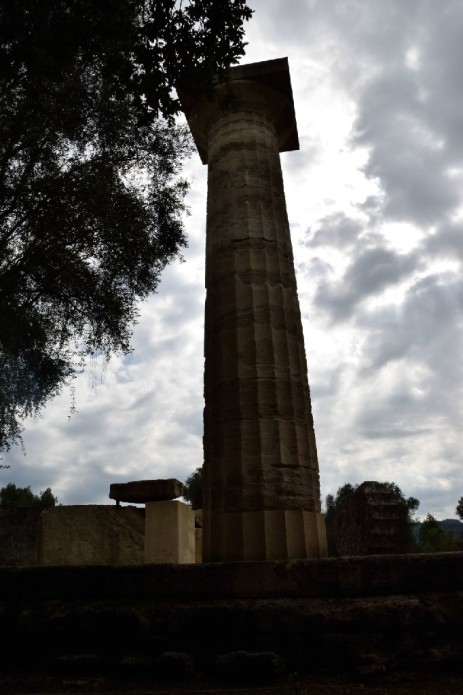 The ancient games lasted over 5 days.  On the first day athletes swore in front of Zeus to play fair, not cheat and not bribe others to intentionally lose.  The next day was when boys competed (aged 12-17).  Day three was for the horse and chariot races, and day 4 was when the men competed.  Finally, on day 5, 100 oxen were sacrificed and fed to the winners.  The modern Olympic games were revived by a Frenchman named Cupertine in the 1890’s.  The first modern Olympic game took place in Athens in 1896.  When Cupertine died, his wishes were for his body to be buried in France and his heart to be buried in Olympia.

Our last stop in Olympia was at the Archeological Museum.  The statues pictured were taken from the pediments of the temple of Zeus. We looked through the museum with our excellent guide, Vasilis, and then loaded up the vans. 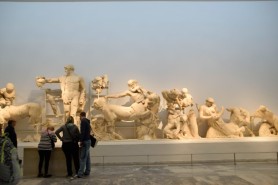 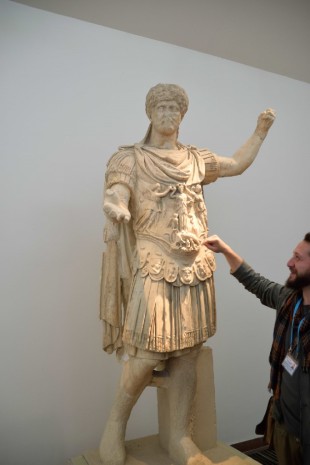 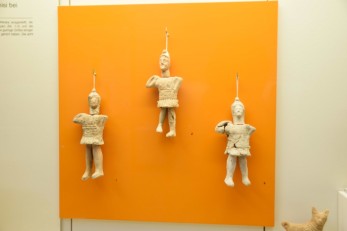 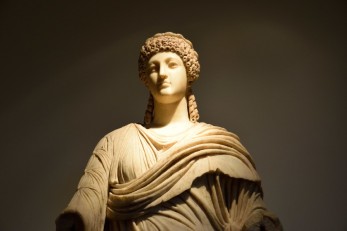 Andreas drove us back to town for lunch.  By now it was 1:30 and we were getting hungry.  We ate at a restaurant that served traditional Greek food.  The owner brought out some freshly baked pita bread with tzatziki sauce.  Oh my, it was tasty!  We devoured that while we waited for our food.  I had wanted to order pastitsio, but apparently, only moussaka was being served today.  I chose a gyro platter instead; Clayton had souvlaki.  Lunch was over much too quickly, but we had one more stop to make so our driver picked us up and drove us to our final destination, a local winery. 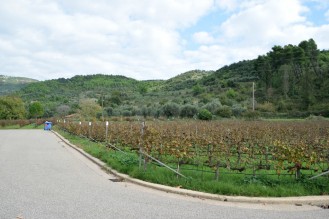 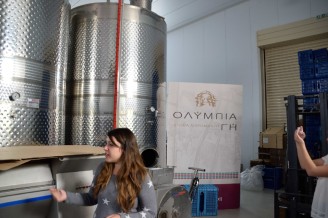 The winery owner’s daughter gave us a brief tour of the winery and explained the wine-making process to us. We then were led to a table and did a wine-tasting.  We were each given a plate of bread, cheese, and salami as well.  What was funny was that the men and women were given different wines (our last tasting).  The women were given a dessert wine; the men were given something much stronger.  Sexism is alive and well in Greece! 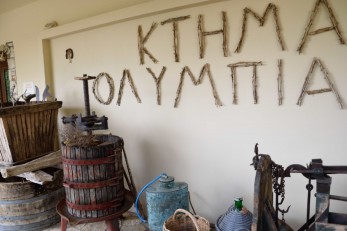 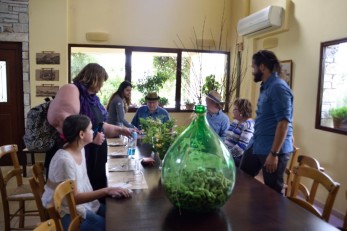 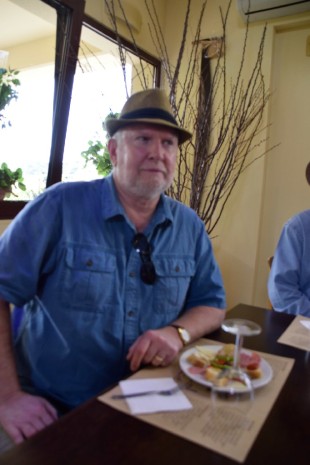 After a very enjoyable day, we returned to the ship.  All of this touring is getting exhausting!  We had a quiet evening in our cabin because tomorrow we are off for a full day in Athens.