Today I celebrate my 59th birthday as our rail trip comes to an end. Tomorrow, we fly home to the US. I will be writing a post about all of the things we have learned along the way. We have learned so much about train travel as well as European travel in general.

Rather than spend another day in Cologne, we opted to take a train to the town of Cochem, which is located on the Mosel River. We switched trains in Koblenz and ended up on a regional “milk run” to Cochem. The train stopped every 3 minutes at a new station. No big deal; we were not on any type of time schedule, so were not in a hurry.

The HBF is on the outskirts of the town, but the walk in to the main part is very nice because there is a path along the river. Cochem castle is visible up the hill. We did not walk up, but did see that there was a little tourist train that a person could take to reach there easily. 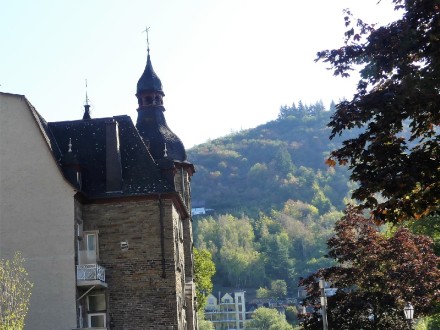 My husband had visited Cochem frequently when he was in the military (early 70’s); he said that it had really grown in its tourist value. I am sure river cruises have something to do with that; the town was overrun with people visiting from a river cruise! This has been true of many of the charming towns we have visited. I guess that means that the town is interesting enough that the cruise companies included it on their itinerary. 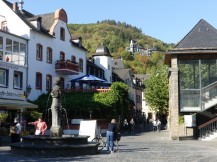 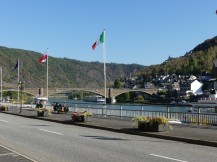 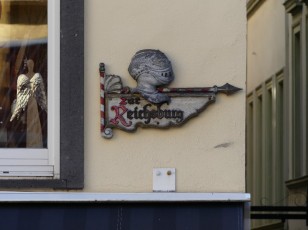 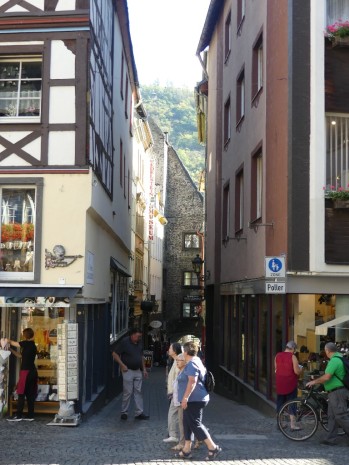 There are plenty of shops selling clothing, souvenirs, and local wines, as well as plenty of places to eat. The prices in the main part of town tend to be higher than the cafés located closer to the train station. Location, location, location! 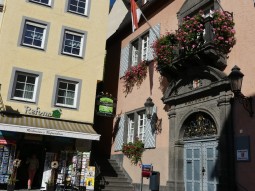 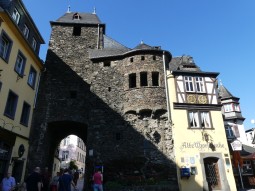 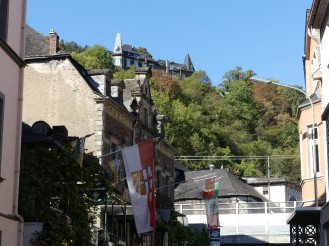 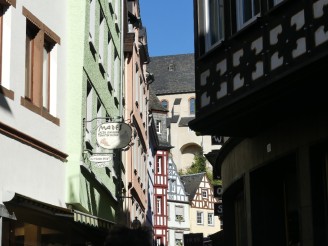 There is a small town square in front of the Rathaus (city hall) and there is a small horsy statue commensurate with the size of the square. I think there has only been one city that we visited that did not have a statue of someone on a horse.

We ended up on an express train back to Koblenz, and then another express train to Cologne. The train ride is really beautiful. Much of the ride is along the river; first the Mosel, then the Rhine. You can even spot a few castles along the way.