We were originally scheduled to go to Cairo on November 7th but this port was canceled due to security reasons.  Though people were none too happy about it at the time, it turned out to be a very good thing; after non-stop touring, we were pretty exhausted.  If we had needed to catch a bus from the port at 7 am in Port Said, which was the original plan, I don’t think we would have enjoyed the day very much.  It is a long drive from the port to the pyramids.  Instead, we were able to sleep in and get caught up on the serious business of relaxation!

People continue to call me and email me to see if they can still get in the Petra and Luxor tours I have set up.  At this point, I am referring them on to the company to book directly.  I don’t want to waste my precious internet minutes sending emails back and forth, but they are welcome to do so themselves.  I also had two couples cancel; one for medical reasons, the other, who knows?  She saw me in the atrium and dropped by to let me know that they had changed their minds.  I suggested she email the company directly to let them know, but she did not want to do so; I guess she wanted me to use my minutes instead.  I told her I would let them know when we got to port.  Clayton tells me that I was not my usual friendly, cheerful self.  I guess I am a little tired of all of the extra time these excursions seem to be taking up.  This is entirely my own fault for taking this job on, but it has turned into a job; I was kind of hoping that once we were on the ship that people would just follow the directions I gave them before we left.  It apparently is not to be. . .

Today is November 9th and we are cruising along the Suez Canal.  I will post a few pictures, but the scenery is quite similar – desert, followed by more desert.  We entered a lake and were surrounded by freighters for a while; now we are back to, you guessed it, desert!  There are watch towers with guards all along the canal; helicopters fly overhead.  We had received a letter in our cabin that at night we were to keep our curtains drawn and lights out because we were traveling through a high-risk security zone (piracy is a problem).  There was also a drill that took place the previous day where the crew practiced their security procedures.  The passengers just had to stay away from windows during the proceedings.  We have been watching CNN off and on.  I was frankly quite surprised to find when I turned the tv on this morning that Trump was in the lead.  As I write this post, he has been declared the  new president.  Most of the people on the ship are from other countries and are curious as to what we think.  None are Trump fans; all are concerned about how his presidency will affect the rest of the world.  Enough on that topic! 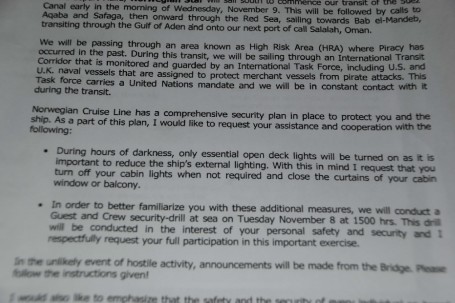 We plan on spending the rest of the day relaxing in preparation for a couple of very long days ahead.  Tomorrow, we will arrive in Aqaba, Jordan at 7 am and will leave immediately for an excursion to Petra and Wadi Rum.  Well over 100 of our closest friends will be coming along with us!  Actually, we have met some wonderful people that we are happy to now call friends, and will no doubt be meeting more as we continue our journey.  We have been told that the journey to Petra is a couple of hours long, so tomorrow will be close to a 12-hour long tour day.  Luxor is supposedly 3.5 hours from port, so the following day will be quite long as well.

One quick note on the Suez Canal – there was definitely a strong military presence.  We passed multiple guard towers, and when we entered the two lakes and the Gulf of Suez, there were also helicopters monitoring the ships. 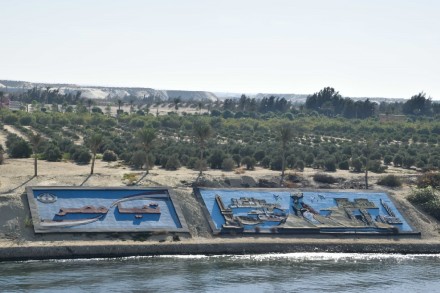