As a change of pace from my usual over-planning ways, we decided to be more flexible on this trip. We had researched possible things to see in each city that we are visiting but did not plan a step-by-step itinerary for each day. For our first day, we wanted to see the Grand Palace which is a must-see, but also to visit the Forensic Museum which is an off-beat site. We had investigated public transportation and decided to purchase Rabbit passes which can be pre-loaded with Baht and used for the BTS Skytrain (light rail). We figured we could use Google Maps for walking directions to the places we wanted to visit.

Our hotel provides a free tuk-tuk service to Terminal 21, a large shopping mall which is on a main road. From there, we walked across the street to the BTS station to purchase our Rabbit passes. I had already mapped out how to get to the Grand Palace – one transfer on the BTS and then catch the Chao Phraya Express boat from Sathorn Pier. The BTS part of the trip was really straightforward; no problems at all. It was quite crowded but at least it was air-conditioned! When we exited the station there were signs directing us to Sathorn Pier. We had also stopped in the tourist information office at the station and asked the man where to go (just to be doubly sure). At the pier there were two docks – the one on the left was labeled tourist ferry; the one on the right was a long-tailed boat pier. We figured we didn’t want the tourist boat so headed to the right. The fare was 100 Baht, which sounded expensive (it isn’t; it’s a little over $3). I had read that it was less than 20 Baht so was kind of shocked by the price.

The long boat ride was a hoot! Getting on that boat was a challenge. None of this ramp nonsense to make it easy; you hop on a boat that is bobbing up and down with no railing to grasp, no steps, no ramp and no one to assist you. You had to step on a squishy tire and then jump on board. The ride was nice and bumpy! Definitely not for those with back problems but very scenic. There were stereotypical Thai-style buildings visible. There were other long-tailed boats as well as ferries traversing the river. We passed a few temples. We were dropped off at a small pier with no directions as to how to get to the Grand Palace. 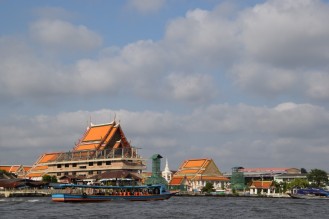 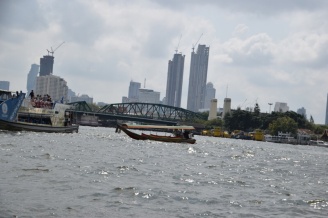 One little problem with our plan to use Google Maps (as well as a few other apps we had downloaded); the directions tend to come up in Thai. This language is really hard to read! As in, impossible. So, if you can’t read the street names, it’s hard to follow the directions. We figured we couldn’t be too far away from where we were headed and would be able to see the building soon. There was another couple that had been on the boat with us that had their phones out and were trying to find the place as well. We found a main street and turned left onto it. Since were obviously lost, a nice man on the street offered to help us. He told us that it was a special Buddhist holiday and because of that, the Grand Palace would not be open until 11 am, nor would Wat Pho because the monks were praying . He suggested that we could see several other sites in the area and that we could hire a tuk-tuk for 40 Baht for 2 hours to take us to them. Each of the sites we would visit were free and 40 Baht is less than $1.50 so we figured it was a good idea. He flagged down a tuk-tuk for us and tried to explain to the driver what he had in mind. The tuk-tuk driver seemed confused by it all and didn’t want to do it. We ended up walking away from the guy. We figured there was a scam in there somewhere and felt uncomfortable.

We walked a block further and found that we were at Wat Pho already. Despite what our “friend” had told us, it was open for business. It cost 50 Baht each to get in, but a bottle of water was included in the price of admission. We walked around and took some pictures. In order to enter the building to see the giant reclining buddha you had to remove your shoes. We were familiar with this from visiting other buddhist temples on previous travels. What can I say about the giant reclining buddha? Yes, it was giant! And yes, reclining. 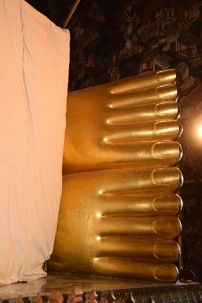 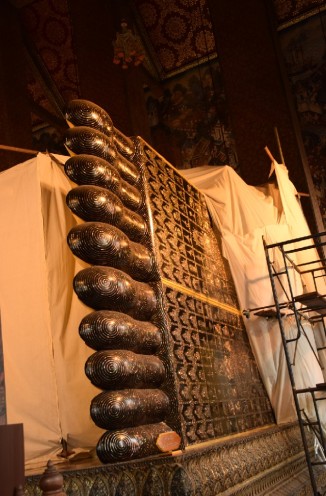 By the time we left, Wat Pho was getting very, very crowded. We decided to try to get to the Forensic Museum next and come back to the Grand Palace another day. To get to the Forensic Museum you had to cross the river. It was around 2 miles of walking which for us is normally no big deal, but with the 90+ degree heat and humidity, we didn’t think it was a good idea. So, we found a tuk-tuk. We tried to explain where we wanted to go; the driver seemed unfamiliar. This ended up being a recurring theme – none of the taxi or tuk-tuk drivers could ever figure out where we wanted to go. Anyhow, he quoted us 500 Baht for the trip. That was a ridiculous amount of money for such a short trip so we passed. He chased us down the street, lowering his price as we walked.

We decided to walk in the direction of the Grand Palace instead. We took a wrong turn and ended up on a pier with a ferry that would take us across the river for only 4 Baht! We figured after crossing the river that we could find a tuk-tuk to take us the rest of the way to the Forensic Museum. It turns out that Wat Arun (another temple) was across the river so we visited it and took some more pictures. 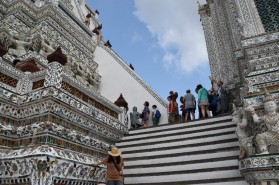 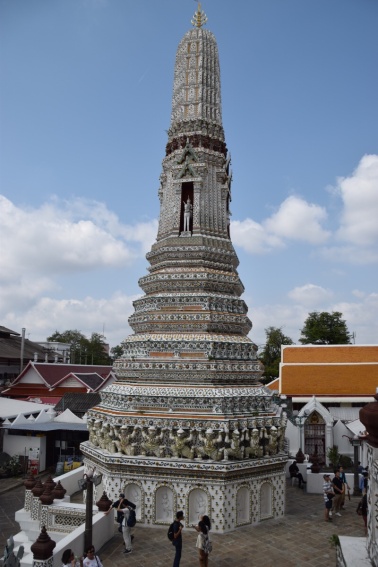 By now the heat was really starting to get to me so we decided to skip the Forensic Museum and catch a boat back to the BTS station. There was a HOHO boat that we could catch for 50 Baht that would take us back to where we started (or so we thought). We ended up at a completely different place than where we caught the boat in the morning. We expected to be able to cross the street and catch the BTS but there was no station in sight. A taxi driver stopped to “help” us (aka offer us a ride) but when we declined he pointed us in the direction we should walk. We pulled out our phones again to see if we could find walking directions to the BTS station and they said it was 0.7 miles away! We were seriously confused and by now I was getting overheated so we decided to flag down a tuk-tuk to take us. We found one pretty quickly; we showed him the name of the BTS station we wanted to go to; he said he wanted 200 Baht to get there. Since it was less than a mile away, that seemed like a ridiculous price so offered him 100 Baht. He agreed and we hopped on.

What a crazy ride! We were all over the road, including driving on the wrong side of the road into oncoming traffic. We may have also driven on the sidewalk. It was nuts. And, it was a long ride for being such a short distance. I am not sure where all he took us but he proudly stopped at a BTS station to let us off and then demanded 200 Baht. Wrong BTS station. . .I handed him the 100 we had agreed to and we headed in to the station. Even though it was the wrong one, I knew we could figure out how to get back to where we started AND it would be air conditioned.

We made the correct transfer but got off on the wrong stop. Oops! We knew that we needed to get off by the Terminal 21 mall but when we walked out onto the street, there was no mall in sight. On the plus side, we finally got one of our maps apps to work so were able to figure out where to go. And, we got to experience a little more Bangkok street life – we passed by beggars, hookers, and tables of male “enhancement” drugs. We finally made it to the mall and the blessedly wonderful air conditioning.

The mall was really unique. It is a themed mall. At the doorway the doormen dressed as pilots; they salute you as you enter. There is also a security checkpoint. The mall is 9 stories tall. Each level is themed – Istanbul level, Tokyo level, Paris level, etc. The stores on that level tend to go with the theme. We saw the most interesting things for sale! And, the ladies room had the coolest toilets ever. Not just a bidet – you got your choice of the spray pattern you wanted. And, there was a blow-dryer built in. Ha! We had lunch at the food court on the lowest level. We found a restaurant called Santa-Fe. They had a combo deal where you could choose your meat, dipping sauce, and a side; iced tea and dessert were also included. We chose chicken and hash browns (what we call tater tots in the US). The waitress also brought us a tray of french fries. We had been chosen as a “cute couple” and so we got to have our picture taken with our fries. Not sure what they do with the pictures but it was very sweet. And, a good thing we got those fries because the meal came with a total of 6 tater tots! No overeating here! 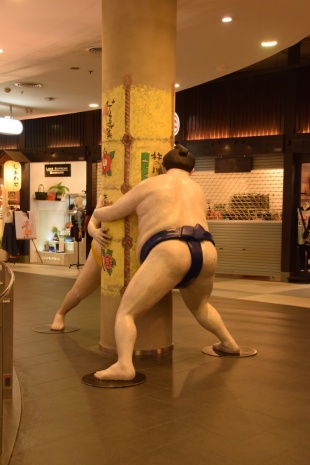 We called our hotel to send the tuk-tuk to pick us up and take us back. We had had enough fun for the day. It was hot and we were tired! When we returned we spent some time by the pool. We were pleasantly surprised by the lovely swimming pool. It was located on the roof of the building. The water temperature was perfect and by then it was in the shade so it was it wasn’t too hot when you weren’t in the pool.

Again, we had dinner at the hotel; tonight I had an excellent Tom Ka Gai soup. We will venture out to other places but are still a bit tired from our travels so are taking it easy.