Oh, the logistics!  I had five cars of 6 people each booked for an amazing evening of fun in the desert.  The group was a composite of people that had were on their last night of their cruise along with those that had not yet embarked.  And that is where the problem began…

Not having been to Dubai before, I assumed that people could be dropped off in front of the terminal building.  The ship docked at 12 pm and we did not need to leave until 3 pm, so had arranged to meet everyone by 3:15 at the latest in order to get into our groups and pool the funds to pay the drivers.  Clayton and I went outside at 3:00 to wait; we had already met with those that were already on the cruise.  By now, they had all figured out that I like to arrive early!  We found that we were missing 6 people; 4 that were not on the cruise yet, and 2 that were.  The tour company representative showed up by 3:15; I told him that we were still waiting for some of the people.  Three of the groups had everyone there, so he sent them on their way.  I told him that the most of the people we were waiting for were not on the ship yet; he told me that they could not enter the port and so were probably waiting at the gate.  I asked him to send one of his drivers to check.  He called him quite a few times and was told that no, those people were not at the gate.  So, we had three groups waiting:  mine (we couldn’t leave until the problem with the missing passengers were cleared up) and two other groups (a couple had booked a sixth car; they were missing three people as was the other group).  We waited some more.  More phone calls took place.  We decided to combine the two groups of 3 into a group of 6 and only have 5).  Finally, we could go!

We were lead to a white Toyota 4×4 Land Cruiser.  I made the mistake of getting in the vehicle first, so Clayton and I were in the back.   It was a long drive to the gate (easily a mile or so); when we went through, we could see the missing passengers waiting by the side of the road.  The driver that had been sent was standing next to them.  He apparently didn’t put two and two together and realize that they were the passengers we had been waiting for.  Fortunately, the tour company rep did realize it and stopped to pick them up on his way out of the port.  Two people never showed up, nor did they contact me to let me know that they would not be there.  The end result?  The last group had a more expensive tour because there were fewer people.  Very unfortunate.  I guess people don’t realize that when they don’t show up that it will impact others (or don’t care. . .).

The driver had a very quiet voice and so I heard virtually nothing of what he said along the way.  The people sitting in the middle seat would pass along bits & pieces of information, but even they had difficulty hearing him.  I did pick up on the fact that Dubai has an old part and a new part; old part was on the left and the new on the right.  It was very, very hazy so we couldn’t see much of anything.  If you looked carefully you could see the Burj Khalifa; other than that it looked like the skyline of most major metropolitan cities.  We left the city and entered a more arid, desert-like area.  At one point we passed a construction site for a Universal Studios.  It was partially built and then deserted.

There were camels roaming freely on the left side of the road.  There was very little traffic, but I could only assume that later there would be because they had 4-lane traffic circles.  I have never been in a traffic circle with that many lanes before!  The driver pointed out a Bedouin camp on the left-hand side.  Soon, the sand changed from white in color to red.

We made a brief stop at a grocery store (mainly for a quick toilet break); the parking lot was filled with white Toyota Land Cruisers.  Could it be that our group of 6 vehicles was not the only ones headed for an evening of fun in the desert?  We resisted the opportunity to purchase any more scarves (hard to believe, right?).  While we took our break, our guide had let some of the air out of our tires.  Hmmm. 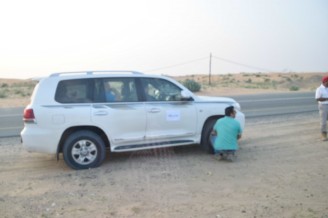 We drove a little further down the road and then pulled over to let yet more air out of the tires.  The guide told us that over 300 companies provide evening safaris in Dubai; the camp that he would be taking us to was shared by 40 companies.  Tonight would be a relatively quiet evening; not as many groups were booked as normal.

We pulled off the road completely and headed into the dunes.  For the next 20 minutes or so (I lost complete track of time) we went “dune bashing”.  It was a really wild ride; our driver was a pro!  This was definitely not for those with bad backs and was a hoot.  As the sun was setting we stopped to take some pictures.  While we snapped some pics our drivers used a compressor to refill the tires.  Our driver really liked the sand.  While other cars were driving back on the highway, we stayed on the sand and paralleled the road.  Eventually, we joined the herd of white Land Cruisers and drove a short distance to the camp.

Immediately after parking we were directed to three camels that were roped together.  It was camel riding time!  I had been looking forward to this, resisting other opportunities to ride a camel in a few of our previous port stops.  Do you have any idea how difficult it is to get onto a camel?  The camels were seated, but are much wider than a horse.  It was a real challenge to get one leg over the top and get seated.  And, might I add, a camel is not the comfiest of creatures to sit upon.  My husband commented that it was especially uncomfortable for the men in the group.  When the camel stood up it was the strangest feeling – it lurched to its feet and we lurched with it.  It felt like we might fall off.  We tried to recapture our balance.  The camel herder told us to lean back which was easier said than done.  We managed to stay on, which was a major accomplishment and bumped along for a short ride.  We watched as the riders on the two camels in front of us tried to maintain balance while the camel returned to a seated position.  When it was our turn we looked as ridiculous as they did.  Let’s just say it was not a graceful experience.  As much as you try to lean back, your body wants to lean forward to counteract the movement of the camel.  We were happy to get off those dromedaries and walk into the camp!

Entering the camp was like entering an oasis in the desert.  There were lights all around the outside; the inside had a stage in the center that was surrounded by tables.  Each table had 6 sets of cushions for us to sit on.  Our driver pointed out the different activities that we could participate in while waiting for dinner and the show.  Henna tattoos were available in the first booth.  Next to that was a booth where you could dress in traditional Arab clothing and have your picture taken.  We were happy to see clean toilets available.  You have no idea how exciting that is after having spent a couple of weeks in this part of the world.  I can’t wait to be able to use toilets where you can flush the toilet paper again (it’s the little things in life, right?).  There was a bar and an area where you could smoke a hookah if you so choose.  There is also a dune behind the camp where you could sandboard.

I had wanted to get henna tattoos on my hands but the line was very long.  I did have Clayton take a couple of pictures of me dressed up; I couldn’t talk him into joining me.  We were hungry by then and so joined the food line.  We were handed a pita that had just been cooked over a fire and then could either have falafel or chicken.  We grabbed cans of Coke and went back to sit and eat.  We thought this was our dinner but it turned out to be just the appetizer.  We were told that there would be an Egyptian dancer.

We were completely blown away by the dancer!  He started to spin and continued to spin rapidly for about 15 minutes.  While he was spinning he first had a set of discs that he would rearrange into different formations.  Then the lights were turned out and he lit up his outfit and did various things with his cape.  He blew us all away.  It was amazing to watch. 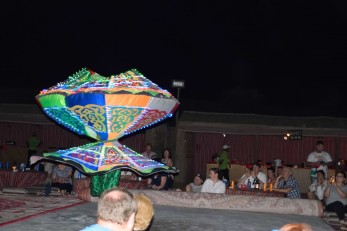 The buffet line opened up so we loaded up our plates with a variety of goodies and went back to our table to eat.  We chatted with our table-mates, swapping stories about our cruise.  Unbeknownst to us, a couple of bombs were seen exploding as we passed by Yemen (part of the High-Risk Area).  According to those that saw it (and we have confirmed this story since with multiple other cruisers), immediately following the explosions, a couple of helicopters were dispatched to hover over the ship.  Who knew?  I think in this situation, ignorance was bliss.  Of course, NCL mentioned nothing about this event to the passengers.

The final act was a belly dancer.  She definitely was not of Arabic heritage, nor did she wear a stereotypical belly dancing costume, but she could really dance.  Not as unique and impressive as the Egyptian dancer, but an excellent dancer nonetheless.  Following her dances, it was time to load up the vehicle on last time and drive back to port.  I think it is safe to say that it was a fun, memorable evening for those that attended.  If you ever go to Dubai, I would put this on the “must do” list! 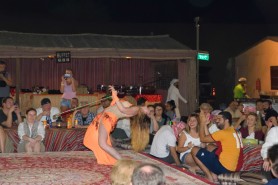 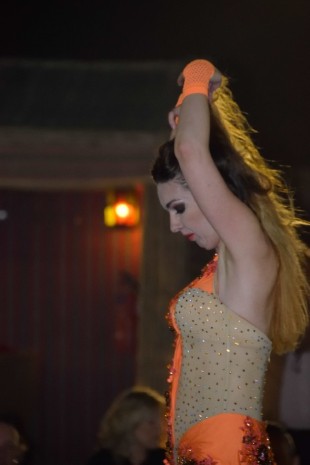