Frankfurt is a very convenient city to fly into when visiting Germany but it is certainly not what most people envision how a German city would look. Like many cities here, Frankfurt was heavily damaged during the war. Unlike most cities here, Frankfurt opted for rebuilding in a modern style. So, it resembles many large, metropolitan cities. Clayton had visited Frankfurt when he was stationed in Germany in the 70’s; I had never seen it. He wasn’t overly enamored with the city but we figured that we would need to recuperate from our flight somewhere and we might as well stay here rather than traveling further while exhausted. I was curious to form my own opinion.

We had purchased 2-day Frankfurt cards on-line prior to our trip. These provide discounts to many attractions as well as unlimited use of all of the public transport available (U-Bahn, S-Bahn , trams, and buses). We decided to take the Hop On Hop Off bus first and then to take a river cruise down the Main (pronounced “mine”) River. From there, we hoped to find a few places we would like to spend a little more time.

The information sent with the Frankfurt cards stated that we could purchase our HOHO and river cruise tickets directly from the Tourist Information office at the HBF. After a hearty breakfast at our hotel, we headed across the street to the TI. The gentleman working there was quite brusque. He told us he did not sell the tickets; that we would purchase them directly from the bus company and the boat company. We asked him where to find the bus and the boat. The bus was easy – it was right outside the TI. He pointed out on the map where the boat was, but gave us no directions for reaching it. Not the most helpful guy we’ve met…He did tell us that there were two companies that did HOHO tours; one started at 9:00 or 9:15 and the other at 10:30. We went out to wait for the bus; the company that supposedly started at 10:30 was already there and waiting, so we paid our money and hopped on. By the way, payment must be in cash; credit cards not accepted. We had read that many places in Europe do not accept credit cards but we have been shocked at how wide-spread this practice is. Coming from the US where it is now practically a cashless society, it has been very surprising how few places accept plastic here.

We took the Grey Line bus tour. There are two routes; one of which is combinable with a boat tour. The Frankfurt pass gave a discount on the tour that combined the two city routes but excluded the boat tour. After having taken the tour, I would recommend skipping the discount offered and just buy the Express Tour with the boat ride. There were 13 stops on the first loop; only 2 on the second. Unlike most HOHO buses we have been on, you must inform the driver if you want to hop off the bus, otherwise the bus doesn’t stop! It really didn’t matter for us because there was no place that we wanted to get off the bus. 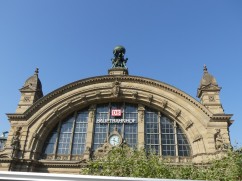 A few things I learned from the narration:

At the end of the first route, the driver announced that everyone that had not completed the full route should exit the bus and move to the bus in front of us. If you had purchased the combo ticket for both routes, you were to stay on the bus. So, we did. Another employee came by to check to make sure we had the correct ticket to do the next part of the tour; we reassured her that we did. Imagine our surprise when we repeated the same exact tour! Partway through I asked the driver which route we were on. Of course it was the same. So, we exited the bus back at the HBF and took a tram in to catch the boat ride. 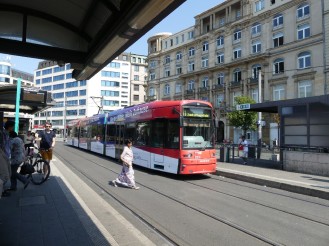 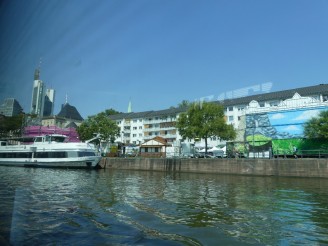 There are two options for the boat ride – a 50-minute ride for 9.8 €, or a 100-minute ride for 12.8 €. One heads south on the river, the other heads north. We decided to do just one leg and opted for the southbound tour which not only sounded more interesting but left immediately. The best part of the ride was the excellent air conditioning on the boat. That, and the delicious sandwiches we had for lunch. The prices were surprisingly reasonable onboard. Clayton washed his down with a beer; I tried apfelwein which is essentially hard cider. It is cheaper than beer because it is not taxed so tends to be much less expensive than anything else (including soda or bottled water). The boat ride itself was neither scenic nor exciting but was a cool and pleasant way to spend a little time. We were glad we had not decided to do the second loop; 50-minutes was enough.

We wandered through a market square area that, if I am not mistaken, was developed recently to appeal to tourists. You must admit that the food trucks are pretty cute! 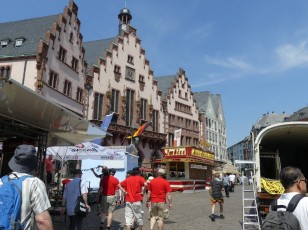 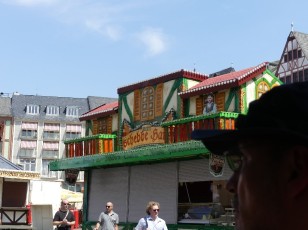 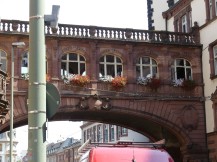 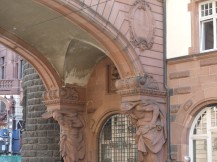 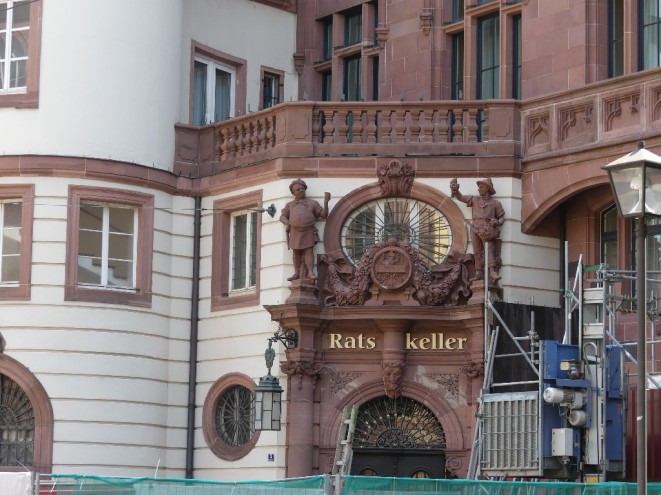 We hopped on the tram to head back to our hotel to relax and cool off. The temperature by now was in the low 90’s. Suffice it to say that Frankfurt probably doesn’t see such hot temperatures often and it is really unusual to find anywhere that has air conditioning. Even those that are have weak ac; it really doesn’t keep you cool. After a delicious dinner, we made it another early evening. Tomorrow we will be heading to Heidelberg.