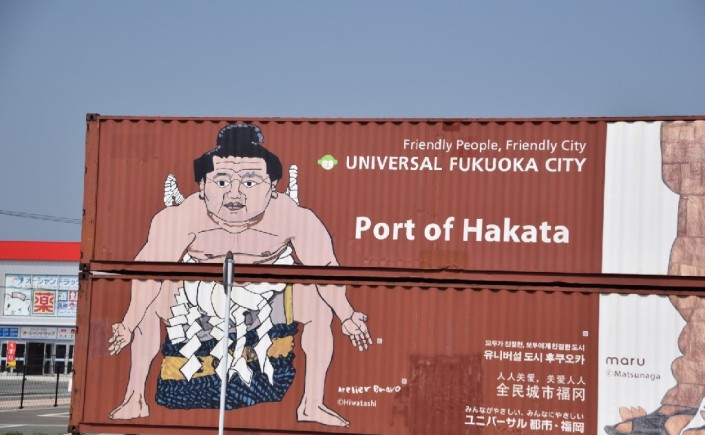 We are so happy to be out of China. The air is blue again and our energy level is returning. Unfortunately, my digestive system has never quite recovered from our Vietnam train trip so I have been uncomfortable and unable to eat much. So sad when on a cruise ship surrounded with so many outstanding food choices!

We have no excursions planned for Japan. The ports here were added after the itinerary change and not much seems to be offered. The limited ship’s excursions are sold out (not that we would have taken one) so many people are exploring on their own. I had found that there is an open-top HOHO bus service in Fukuoka so we assumed that it would be there to pick us up when we left the terminal.

Since this was our first Japanese port, there was an extensive immigration process. A schedule was distributed for collecting our passports (they had been taken from us for the entire time we were in China). We were to collect them by the central elevators based on what floor our cabin was on. After waiting in line to collect, I was informed that since we were Platinum Plus level, our concierge was holding our passports. Our what?! Really? We have cruised several times since achieving that status and have never received any concierge service. So, I got to wait in another line to get the passports. Bruno, the concierge, seemed a bit put out that he had to deal with those of us that were not “suite” passengers (those that will tip him at the end of the cruise for his services). We each had to fill out an immigration form and a customs form.

We were to arrive in Fukuoka at noon. Those of us at Platinum Plus or Ambassador level would disembark first. Following our debarking, people would be dismissed by cabin location. The higher up on the ship you were, the quicker you would get off. Those on the lowest decks were not scheduled to leave until 2:30 pm. The Japanese immigration was quite thorough. We were fingerprinted and had our picture taken and then were sent to have our belongings scanned. We turned in our customs forms and were good to go.

The terminal had an information desk. Since we planned on taking the HOHO bus we didn’t think we needed any information but did pick up a map of the town. We hit the ATM to get some yen and also were able to trade in our remaining Hong Kong dollars (there is a machine that does exchanges many types of currency – very easy).

We walked outside to find the HOHO bus; no HOHO. Uh-oh! No problem; I had also read up on the city bus system and so we asked a port official how to get there. He pointed us in the correct direction and we walked a couple of blocks until we reached the bus stop. It is in front of another cruise terminal building (one that caters to locals, not cruise ships). I thought we wanted to go to the Hakata area but others from the ship told me that the information people said to go to Tenjin. Since we had not taken the time to talk with the information people, I took their word for it. The bus ride cost 190 yen. It is really easy to convert yen to USD; one yen is about one penny. So, just move the decimal point in two places and the bus ride cost $1.90. Because we had traded in our Hong Kong dollars, we had exact change. The ATM distributes larger bills; too large to use on the bus.

When you board the bus you pick up a ticket that says which stop you entered the bus. As you travel the bus route your fare is displayed on a monitor based on where you entered. We got off at stop 4; when we reached that stop we looked up at #1 (where we boarded) to see our fare. There is a change machine on the bus that converts 1000 yen bills into change for you so as long as you have a 1000 yen note, you would be fine. There are video monitors that display how to pay and even the occasional announcement in English to help you along. The bus system was very user friendly! 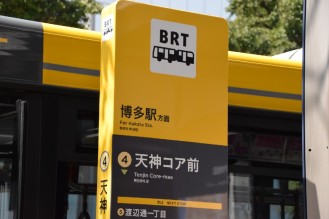 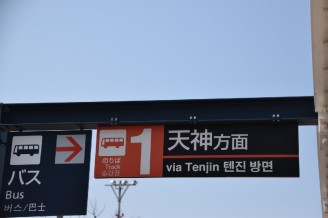 Everyone that had boarded the bus with us was from the ship; all had been sent to this particular bus route. The Tenjin area is the downtown area. It is very commercialized. I had wanted to see the part of the city that was more traditionally Japanese but that is not where we ended up. We walked around for awhile and were struck by the number of video arcades we saw. These were not at all like the ones you see in the US; they were very colorful and actually resembled casinos more than video arcades. I didn’t take a picture inside one because I was not sure if it was appropriate.

I’m not as toilet-obsessed as I may come across, but after the squatty-potties in China, I was so happy to be back in the land of civilized toilets! Though the one I used here was not as fancy as the ones in Bangkok at Terminal 21, it did have a unique feature – in the background, you could hear the sound of running water. I am not sure whether this was to “encourage” your body to cooperate or to cover the sound so as not to disturb others that were using the facilities at the same time. The sound stopped when the toilet was flushed. I have read that the Tokyo toilets can be quite something; we will be there for four days at the end of the cruise so will keep you updated.

I normally would have walked around more and tried to find temples or something interesting (other than shopping malls) but I was still not up to snuff due to my tummy distress. So, we headed back to the bus stop. When we got back to the terminal I saw that we had indeed taken the wrong bus. The Hakata bus would have taken us to the area where the temples were (and only cost 100 yen). There were huge lines of people lined up for the Tenjin bus so I can only assume that the information desk at the cruise port directs people to that bus. There is a sightseeing bus that you can take once you get downtown for another 100 yen; I am not sure where you catch it, though. And, we did see the HOHO bus driving around on the bus ride back; it was completely empty. Perhaps they would get more customers if they stopped at the cruise port to pick people up! 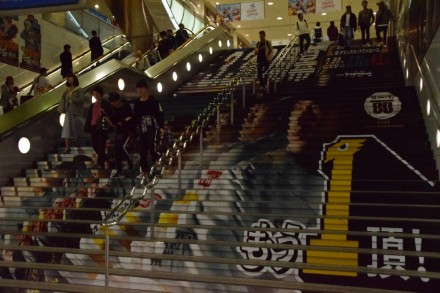 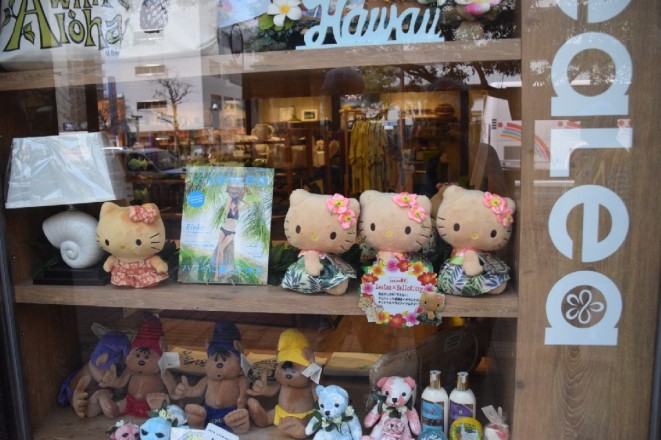 We walked back to the cruise ship terminal area. There is a large shop across the street that has a big drug store and a Family Mart (Asian version of 7-11). We walked through the drug store but none of the items had displays in English so it wasn’t easy to see what you were buying. There was a friendly, helpful employee to assist, however. The shop was definitely popular with the crew. There was also a sitting area between the stores where you could access free wi-fi and also watch a video of the highlights of Fukuoka on a large-screen tv. We had read that there is free wi-fi city-wide but did not find that to be true when we took the bus in to town; no free wi-fi in the Tenjin area. But, we could access it in the port so we spent some time there. 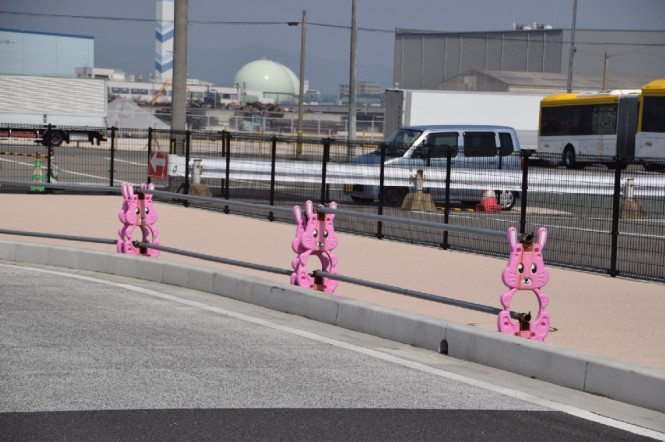 I don’t have many pictures of the area because why take pictures of something that looks just like any big city? I am disappointed in myself that I did not trust my own research and take the bus to the correct area. We have a tendency to rush rather than taking our time reading all of the information when we arrive at a new place. Definitely something to work on for future travels. At least we have two more ports in Japan; I am sure we will see more interesting things there.