We had high hopes for decent weather in Hamburg; the forecast was for mid-60’s and partly cloudy skies. We arrived by 6 am (scheduled arrival was 8 am); the weather looked promising. Clayton sat out on the balcony while I got ready for the day; the temperature was nice and it was cloudy but not rainy. Our plan for the day was to take public transportation in to the city center (we were docked at Altona) and wander around on our own. If it was rainy, our backup plan was to take a HOHO bus. Just in case of rain we wore our rain jackets.

There is a nice cruise terminal building at the Altona docks and an information booth was set up. The young woman staffing the booth was very thorough; she spent about 5 minutes per couple answering questions and handing out maps. We were fourth in line so spent quite a while waiting. When we finally got our turn she confirmed that there is indeed a HOHO bus but that to catch it we would have to take the ferry to the place where it would pick us up. The ferry is located right next door to the cruise terminal so it was easy to find. FYI, you need either Euros (1.60€/person) or a chip and pin card to purchase the tickets; there is no manned ticket booth. A chip credit card won’t work unless you also have set up a pin with your bank ahead of time. Also, the directions for the machine are in German which makes it that much more challenging. There was a button to push for English but it didn’t seem to work. We also couldn’t figure out how to purchase more than one ticket so had to do separate transactions for the two tickets. We happened to have correct change, fortunately. Ferry #62 arrived and departed while we were figuring out the tickets so we had to wait 10-15 minutes for the next one to show up. It turns out that no one actually takes your ticket when you board the ferry so if you want to live dangerously, skip buying one. I hear there is a hefty fine if you are caught without a ticket onboard! There is also a ticket machine on the boat so you can purchase one after boarding.

The information person had told us to get off at the second stop. Right near the dock there was a booth to purchase tickets for the HOHO. The cost was fairly reasonable (17.50€/person) but they only took cash. And, after we purchased the tickets, she told us that we would have to walk another 10 minutes along the waterfront to catch the bus. There was no pickup by the booth. It seemed more than a little odd and it was now raining pretty hard so we weren’t too thrilled about walking. Ten minutes was a gross underestimate; it was closer to 20 minutes. And, we had walked to the warehouse district (Spiecherstadt) which was one of the places I wanted to see. Unfortunately I didn’t realize until after the bus had picked us up that we were in that part of town; it just looked like a location with pretty buildings. I hadn’t taken any pictures, either. Oh, well! 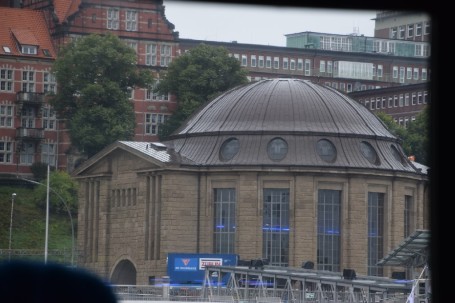 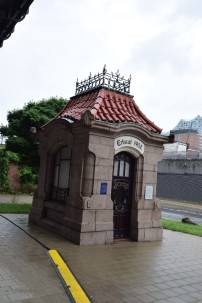 We wandered around lost looking for the bus stop. We were given incorrect directions by someone so got a little more walking in! I had us heading in the correct direction but this person told us to turn around and go back and retrace our steps. They sent us to the transit bus stop rather than the tourist bus stop. I guess he didn’t understand enough English to discern the difference. He heard “bus” and sent us to the bus! Anyhow, we eventually found the bus and “hopped on”. We didn’t intend to do any hopping off today due to the miserable weather.

Just like we experienced on our previous HOHO rides, it was virtually impossible to take pictures. Rain was once again pouring down the windows and with the top of the on, there was no field of vision where one could get a good shot. There was a live guide on the bus giving narration in German. We listened to the English narration on our headphones. There was plenty of factual information given on the canned narration; the live guide seemed to be much more entertaining given the guffaws the German guests on board were responding with. Hamburg is known as the “Free and Hanseatic City of Hamburg” and is the second largest city in Germany (Berlin is #1). It was founded in 834 and was the first city to mint coins. 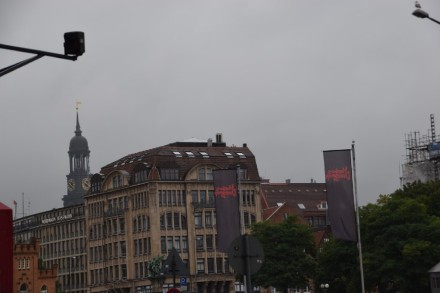 One fact I found interesting was that Hamburg had two red light districts, St. Pauli and St. Georg. Before they were red light districts the areas held pig sties, leper hospitals, plague cemeteries, the city dump and gallows. We passed by hotels where the rich and famous stay. There is a large lake, Lake Alster, in the center of the city. During the warmer months, one can rent a boat. During the winter, if it is cold enough, one can ice skate. There is a walking path (7.2 km) around the lake that is quite popular. On an unrelated note, I have never seen so many Smart Cars anywhere! 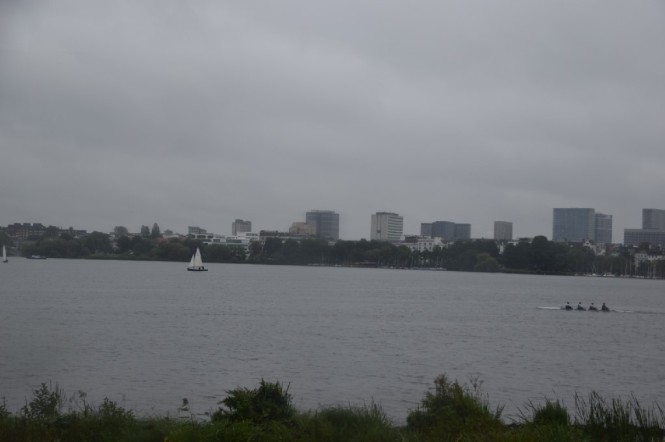 We passed by City Hall (Rat Haus; a most awesome sounding name for anything political!) and Michel’s (St. Michaelis Church); both were beautiful buildings. We ended up getting off the bus by St. Michaelis so I was able to get a couple of pictures of it. The tower of the church is 132 meters tall. There is an observation platform at 80 m; it takes 452 steps to reach it. On the way to our final stop we drove through the infamous Reeperbahn area of St. Pauli. This is still somewhat of a red light district. The St. Pauli area was very undesirable in the past but is now undergoing gentrification. 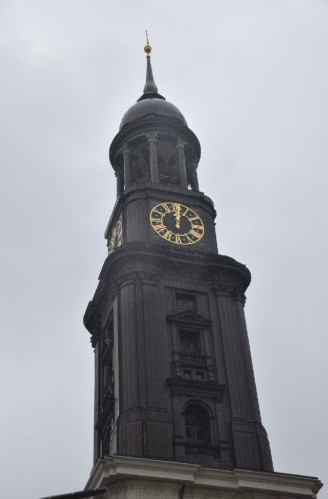 We were hoping to hop off the bus before reaching our starting point. On the map it looked like there was a stop much closer to the ship. The onboard guide spoke good English so I asked her if that would work. Due to Hamburg Cruise Days (more about that later), the route had been changed for the weekend so we would not be making that particular stop. That is also the reason that we had to walk to our first stop rather than being picked up by the ticket booth; no buses were being allowed near the waterfront. We decided to get off the bus anyhow and walk back to the ship. It was only 5-10 minutes to reach the waterfront and then another 20-30 minutes of walking to reach the ship. Along the way there were booths set up for the Cruise Days celebration as well as a couple of musical stages. The rain did not seem to deter the locals from attending the festival; there were Germans toting their umbrellas to stay dry all along the waterfront. 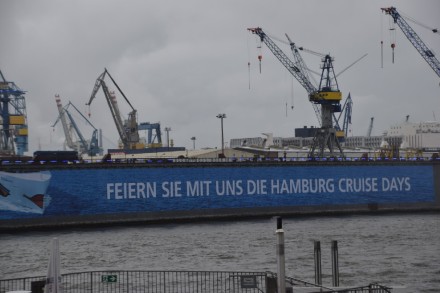 We were happy to reach the ship! Our jackets had once again done their jobs. It was windy as well as rainy; another horrible weather day. We spent the afternoon watching the maritime traffic from our balcony. The clouds actually cleared for an hour or two before it started raining again. I was amazed by how many ships passed by! Some were passenger ferries, some were tourist boats, some were 3-masted sailboats, and some were motorboats. There was an enormous yacht, a cruise ship and a few container ships as well. I waved to one and all, the passengers on the boats waved back. Of course, there were plenty of others on the Jade that were waving as well! 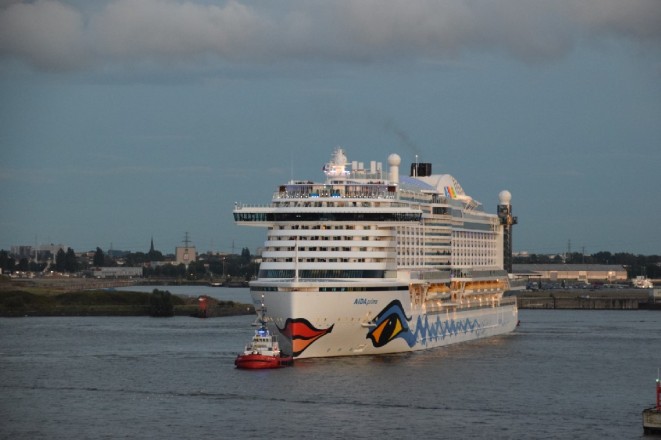 Hamburg claims to have invented cruising in 1891. It is also the second largest port in Europe. As such, they celebrate the cruising industry yearly by having a celebration known as “Hamburg Cruise Days”. In addition to the festival taking place along the waterfront, there is a parade of cruise ships that takes place Saturday night. For the first time ever, an NCL ship (us) would be taking part in the festivities! At about 8 pm tug boats started making a line of the 6 cruise ships that had been docked here. Each ship had blue LED lights decorating it. There were blue lights on the harbor boats and along the Elbe River, as well as on some of the surrounding structures. At 9:15 the parade of boats began. As each boat reached the Lion King Theater (Der König Der Löwen) fireworks were lit. I imagine it was quite the spectacular site from the shore; there were Hamburgers lined up to watch along the river. It was really beautiful from the ship as well! It was a wonderful way to end the day. 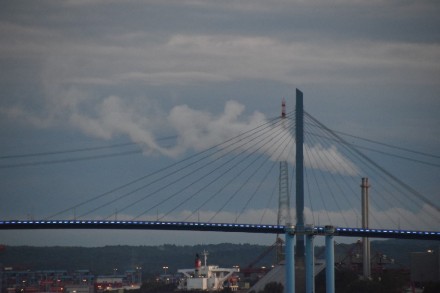 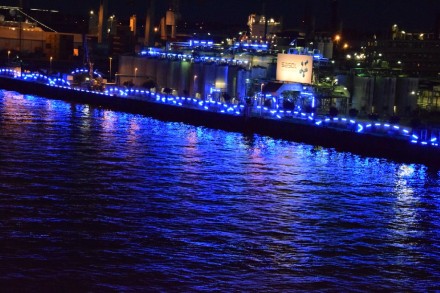 Tomorrow, we are at sea and will arrive back in Southampton on Monday, ending the cruise part of our trip. After we disembark, we will take a train to Bath to start our train adventure!