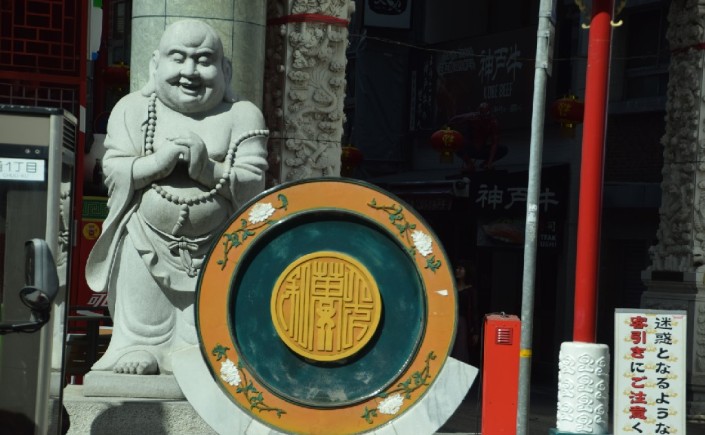 After floundering in Fukuoka, we were all set for Kobe. We both had researched the “City Loop” bus which was a hop-on hop-off bus service (but not an open-top bus). Our only question was where to locate the closest bus stop; there were two listed on the website as port stops. We figured we would ask someone when we docked.

Immigration was quick and simple. We lined up, a drug-sniffing dog came by to check us out, and when it was our turn, the officer just glanced at our passports and sent us on our way. Fortunately, there was a tourist information desk so we were able to pick up maps and information on how to find the bus we wanted. NCL failed to let us know that Kobe provided a free port shuttle bus into town. We would need to ride it and catch the city loop bus there. Coincidentally, the drop-off spot for the free shuttle was one of the stops on the route for the city loop bus. Easy-peasy! The tourist information volunteer suggested that we visit Sourakuen Garden (a traditional Japanese garden), Kobe Nunobiki Herb Gardens (taking the Shin-Kobe Ropeway to get there) and Kobe Harbor-land, a shopping and entertainment area near the port. He also gave us some 20% off coupons for these attractions.

We had checked the bus schedule and found that it started its runs at 9:00 am on weekdays. We were immediately able to board the shuttle and so were in town by about 8:45. Unfortunately, we were dropped off at stop 15 on the route; pickup there was scheduled for 9:33. But, it was a sunny (albeit cool) day so we waited and did some people-watching until the bus showed up. 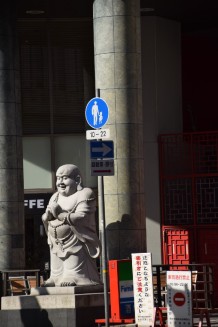 We were surprised to find that it was almost full and that it was full of Japanese people. I assume they were also tourists, though it turns out that some of them were locals that used this bus to get where they needed to go. If the bus is full you have to wait for the next one. We were able to both get seats but only because we boarded first. We had been waiting much longer than anyone else from the ship (4 or 5 shuttle buses had dropped people off while we waited to board) so I didn’t feel guilty at all for snagging a seat. And, it was a good thing I did because they packed that bus full. I had a couple almost sitting in my lap. The tiny aisle between seats had people stacked 3-4 across.

The entire route was supposed to take 65 minutes. We rode it from stop 15 to stop 11 (there are 17 total stops) and that portion took an hour and a half. I was able to take some pictures along the way but many of the stops didn’t have much of interest (unless you are really into shopping). 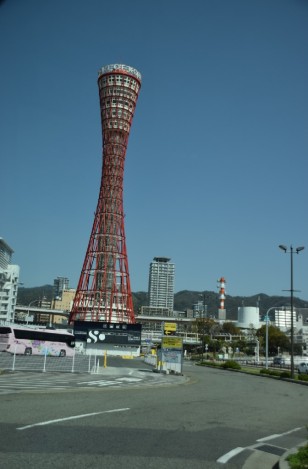 Here are some things to know about the Kobe City Loop bus service:

We were awfully glad to get off the bus! Several groups of people joined us at stop #11 for the gardens. There is a bit of a walk up a steep incline as well as several sets of steps to climb before reaching the ticket office. I wasn’t absolutely sure what a “ropeway” was, but it turns out it is a gondola. We purchased round-trip tickets. You can walk all the way down Mount Rokku if you like; if so, just buy the one-way. I had read that many people ride up and then walk half-way down and catch the gondola the remaining distance. We decided that sounded like the way to go.

One of us (guess which one) wasn’t too enthusiastic about going up a mountain to see the scenery, but it turned out to be a fabulous place to visit. The gondola stops half-way up the mountain (I guess you could get off there and walk up – ha!) and then continues to the top. The day was picture-perfect; blue skies and sunshine. You passed over the gardens and flowering cherry trees (almost in full bloom) and could look out over the city and port of Kobe. We rode up with an Australian couple that were fellow cruisers.

We wanted to get some coffee and a small snack but the restaurant was closed. There was a small snack stand but they only sold hot dogs. They did have coffee (for nearly $4/cup) but we decided against getting any. They also had nice bathroom facilities and the ladies’ room in this one was even better than the one in Fukuoka: it not only had sound-effects, it had a warm-water bidet as well! Oh, yeah! And of course, there is also a gift shop where all types of herbal products are sold.

We meandered around the gardens. I am sure that later in the summer they are truly spectacular. It was a little early in the season for anything that flowered (other than those lovely trees). We did see a few puny tulips and some magnolia trees in bloom. Each garden had its herbs, plants and flowers labeled. The walk back to the mid-platform was really nice. The only thing to note is that the path is fairly steep. It is labeled as wheelchair accessible but you would have to have some strong arms and strong back to maneuver a wheelchair down that path! We debated on walking all the way down but (wisely) chose against it. I believe you can hike down (there are trails) but the scenic path is the upper path; the lower one is mainly trees and shrubs and is not paved. 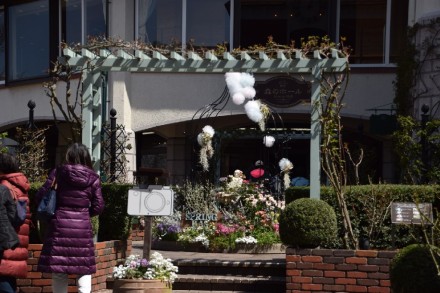 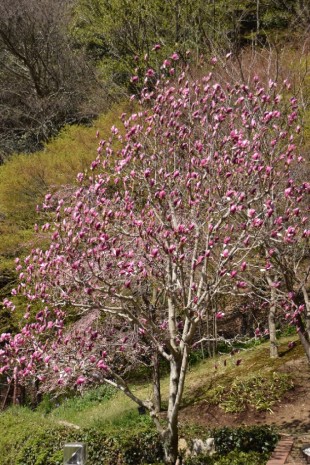 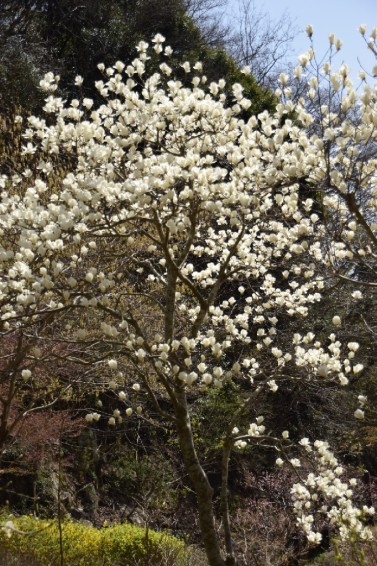 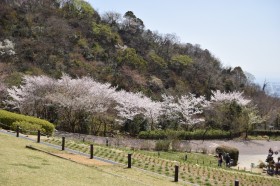 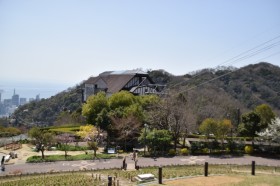 We had to wait awhile for the next city loop bus to show up (it definitely was not running on schedule). We were hoping that it would be less full than earlier since most people would be off the ship by now. No such luck; it was wall-to-wall full of Japanese people. Fortunately, quite a few were getting off at the next stop (Shin-Kobe train station) so we were able to sit for the remainder of the ride. We were only riding for 3 stops so figured it would be a 10-15 minute ride. Wrong again; it was about 40 minutes. We did pass by a boulevard lined with cherry trees which was quite lovely. But, most of what we saw reminded me of downtown Fukuoka. The couple we had spoken to on the gondola ride loved Fukuoka. When they got downtown they hired a cab and the cabbie took them to beautiful gardens and shrines.

We were pretty hungry by now so took the shuttle back to the ship for lunch. We didn’t feel like there was anything we wanted to go back into town to see. We have one more port tomorrow. If we are lucky we should be able to see Mount Fuji there. I am keeping my fingers crossed that our blue skies continue for another day!