Our hotel was located in a former site built to house guests for the 1980 Olympics. There are 5 virtually identical enormous hotels located in a small area (think Las Vegas sized hotels). They are named alpha, beta, gamma, delta, and epsilon to tell them apart. We were in beta, the Best Western Vega Hotel. It was a decent hotel, though the color scheme (bright yellow and blue) left a bit to be desired. There were plenty of restaurants nearby and most importantly, it was close to a Metro station. 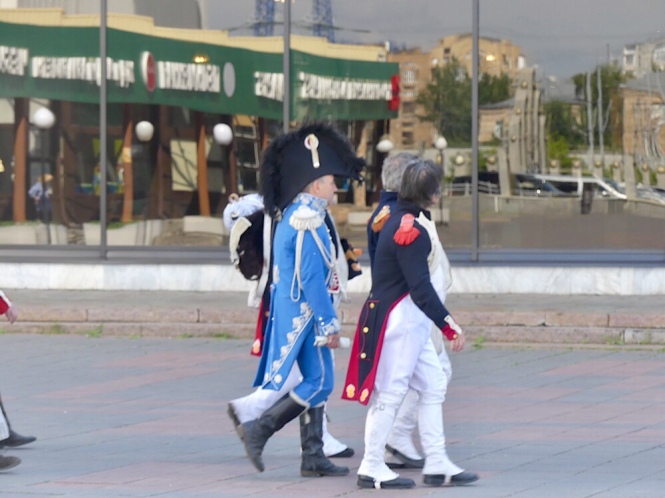 We used the Metro to get into town. The Metro stations in Moscow are quite beautiful. This particular one had brass statues lining the entryways. People would rub the brass for luck as they passed by. The dog’s nose was quite popular! 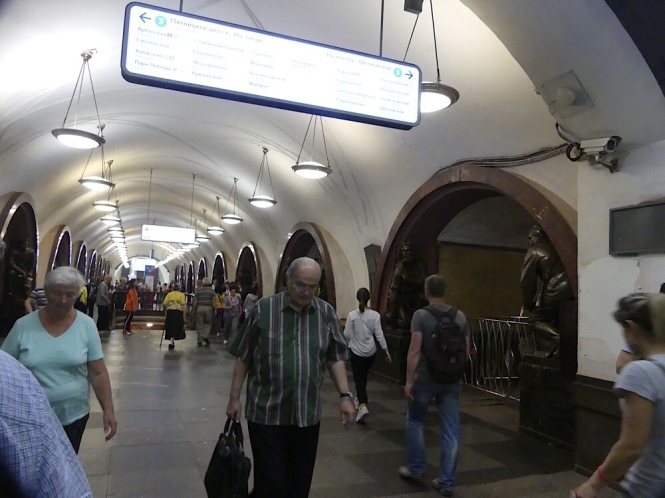 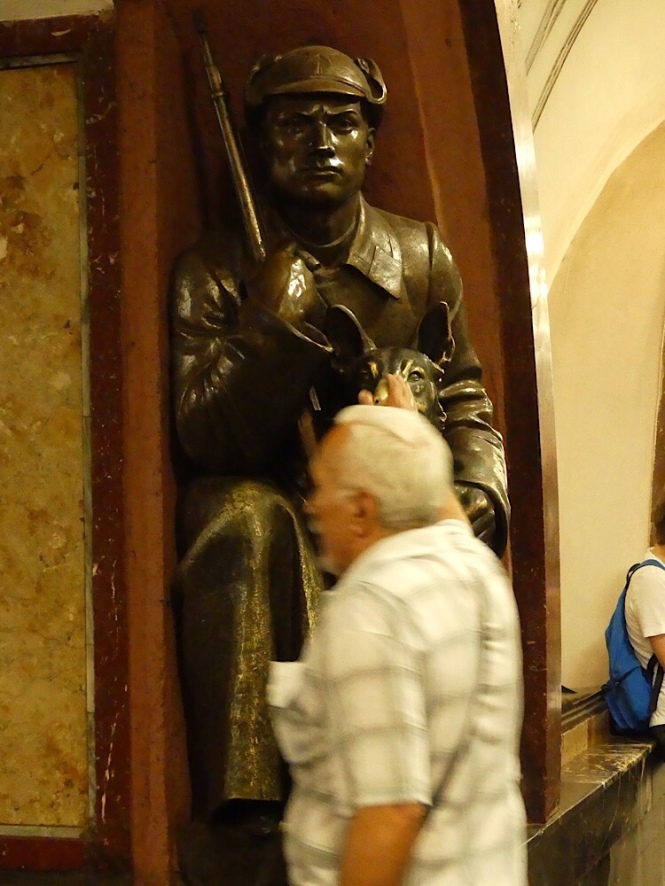 To reach the Kremlin, you walk past the entrance to Red Square and continue walking through Alexander Gardens. On the left is the tomb of the unknown soldier. There is a changing of the guard ceremony hourly. We did not see it on the first day, but did manage to catch a little of it the second day. We were there right before June 12th, Russia Day (kind of the like the 4th of July for Russians) and on the 11th, many areas were closed down. Putin would be putting in an appearance on the 12th so we were thinking that many of the extra security measures were due to that.

We met our Kremlin guide, Irina and she took us in to the Kremlin. I had no idea that the Kremlin is actually huge – like a small city. There are multiple kremlins in Russia; kremlin just means wall with tower. How do I say this nicely? Irina was a walking, talking encyclopedia. I do not mean this in a positive way…she bored the living bejeesus out of me. I dutifully took some notes at first but gave up quickly. Her information was very, very, very complete. She occasionally tried to interject some humor, but it didn’t really work. Let’s just say that the Kremlin tour just possibly was the longest 3 hours of my life. 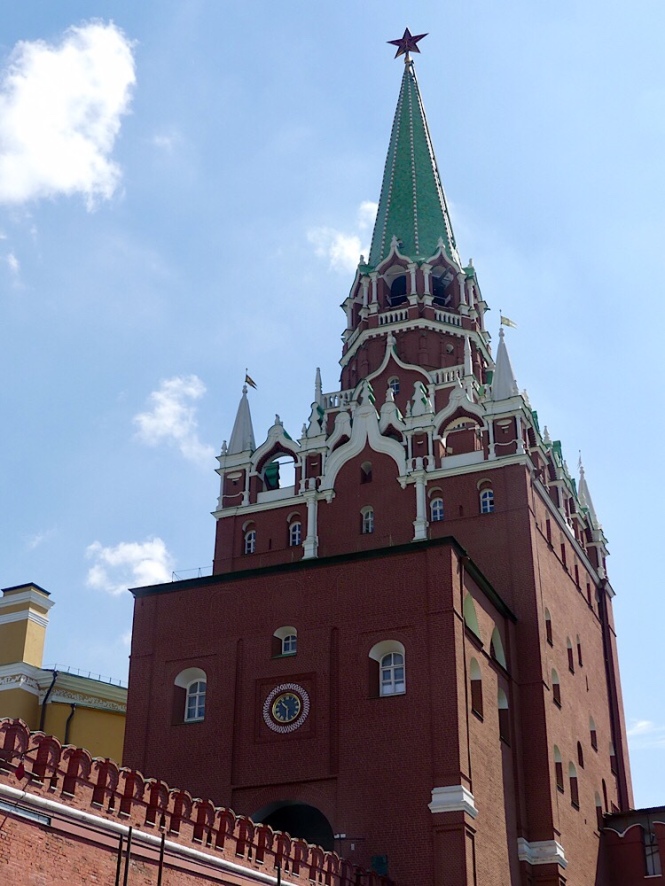 We passed by a massive cannon (biggest in the world). We passed by a massive bell – so massive that it was impossible to mount anywhere or ring. We went to one of the cathedrals but couldn’t enter because someone had rented it out for a special service. We instead went into a different cathedral (no photos allowed). I couldn’t hear her inside; it was so crammed full of tourists that there wasn’t room to breathe. The only thing I did hear was that when the icons on the walls needed to be repainted that they used beer to wash away the old paint (the icons were painted directly onto the walls). 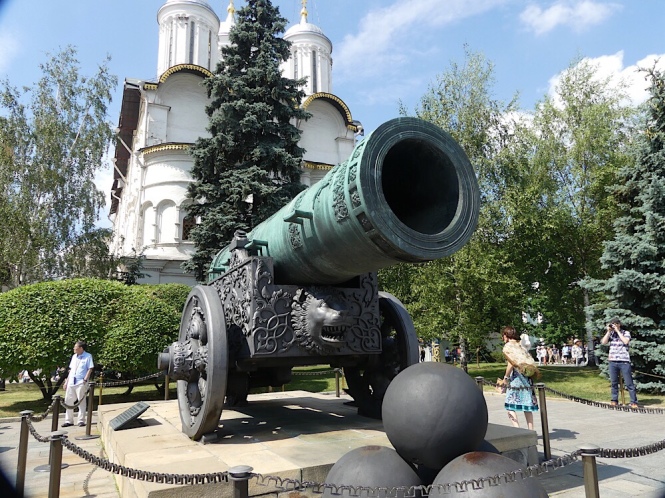 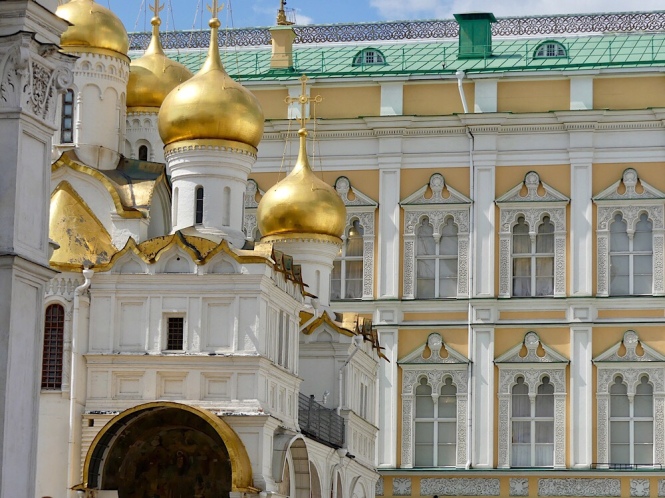 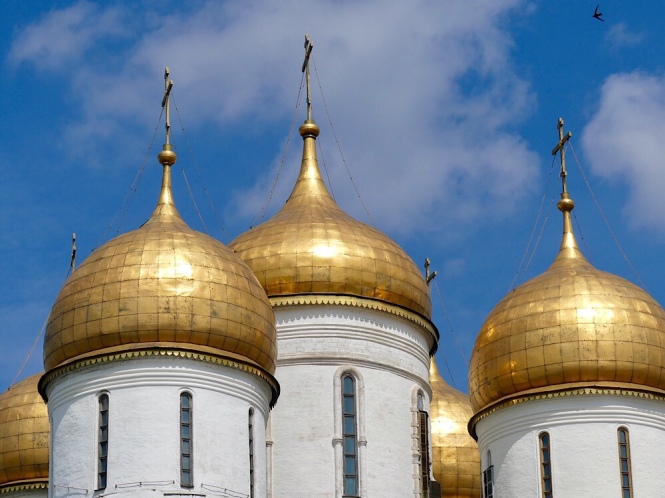 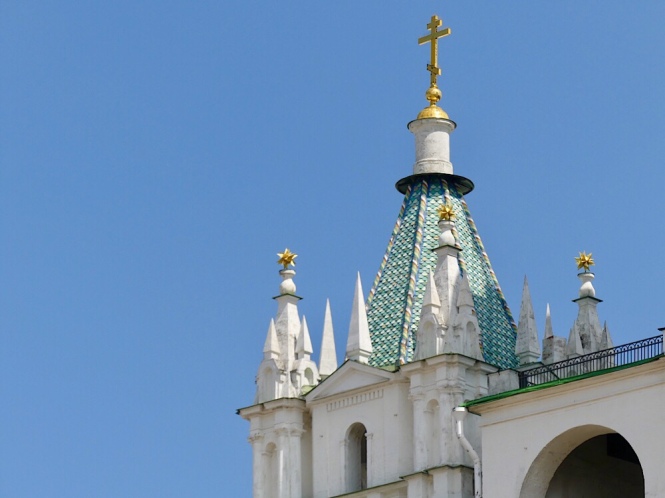 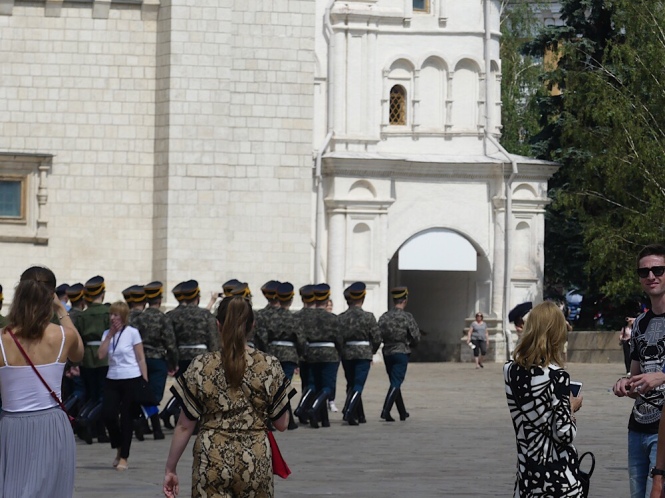 Finally it was time to go the the Armory. This sounded interesting; I find looking at old weapons fascinating. I should’ve known better. This was a museum that contained all types of clothing, dishes, and memorabilia from the Romanovs. The first room we went into had clothing. We stopped in front of every single gown and heard the history of who wore it, when they wore it, why they wore it (and so on and so on and so on…). I completely tuned out after the first outfit. I have lower back problems which occasionally flare up when we travel. As long as I am moving, I am fine but we were standing still for long periods of time while Irina talked; I just couldn’t manage it. So, I found benches to sit on in each of the rooms.

There actually was a room with armor and weapons. And yes, we skipped right on by it!

Finally, the three hours were up and we were released from our bondage. Clayton and I decided that we would do no more tours with the group. The pain wasn’t worth the pay off. We headed back to the hotel so I could rest my back and spent the rest of the day there.

The next day we headed to Red Square. Before entering the square we wandered around the area. Moscow really is a beautiful, impressive city. I enjoyed the statues of fairy tales that we passed by. They were being cleaned so there was no water flowing, unfortunately. I bet at night with the water and lights, it is magical to see.

Because of Russia Day, much of Red Square was blocked off. It was impossible to get a clear view of St. Basil’s. Lenin’s Tomb was closed. But, Gum department store was doing a booming business! Don’t you love this ice cream cart? 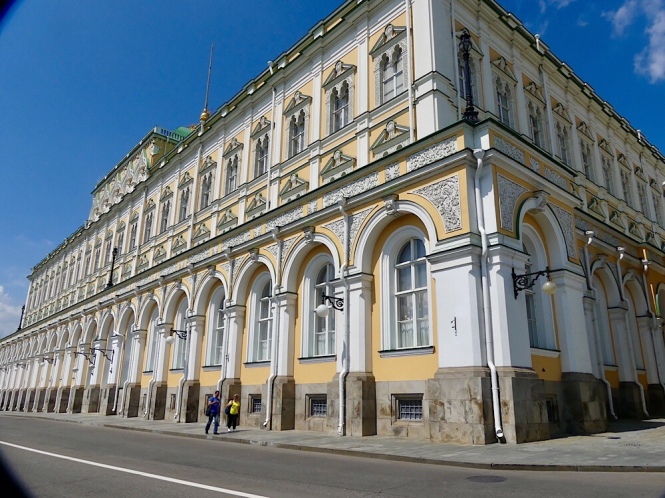 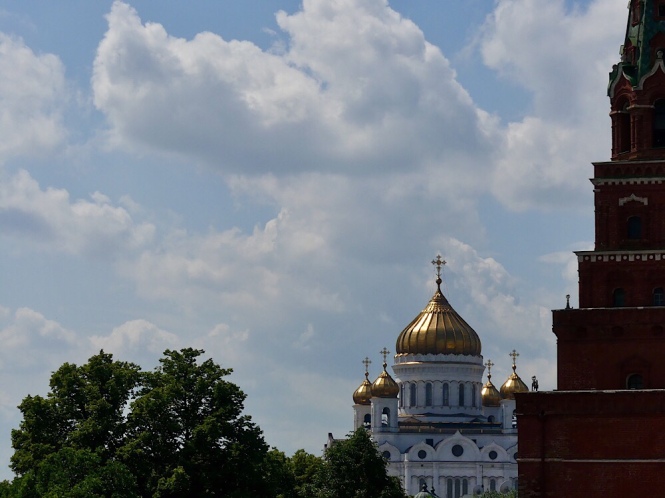 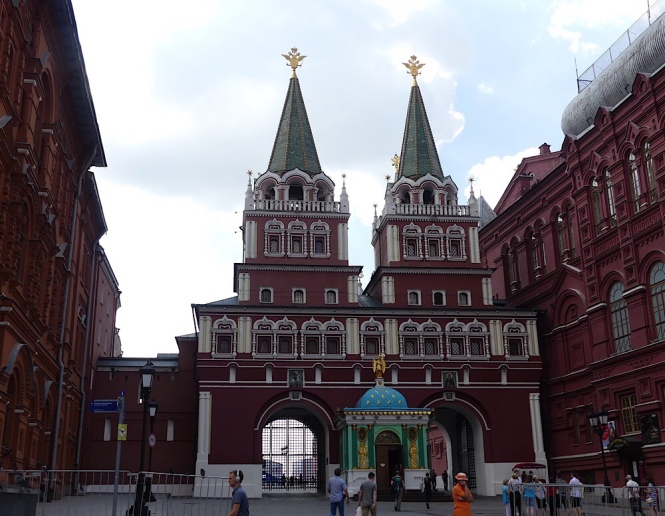 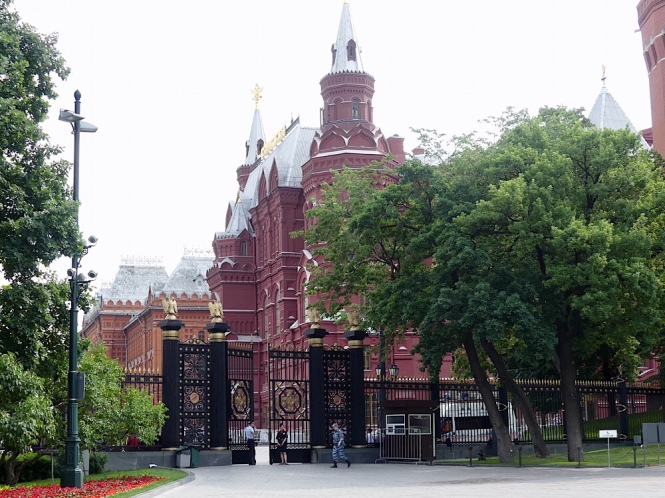 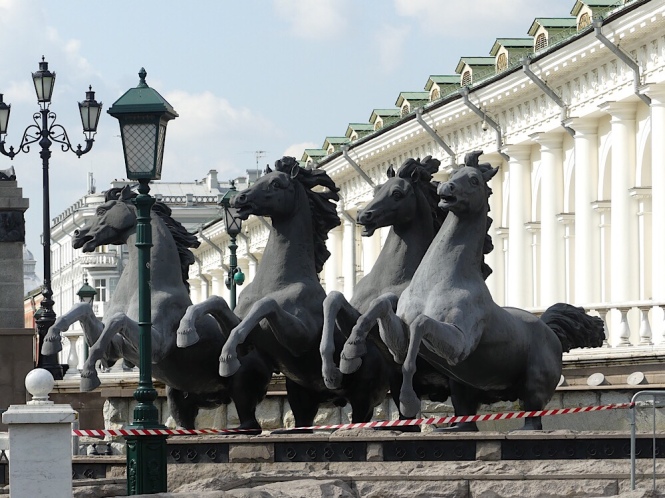 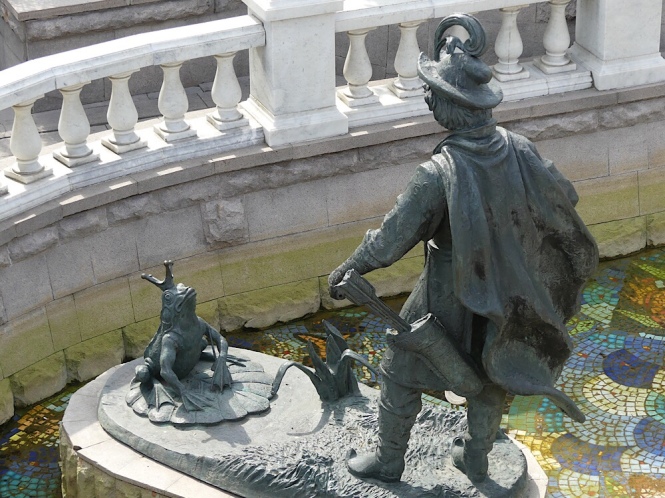 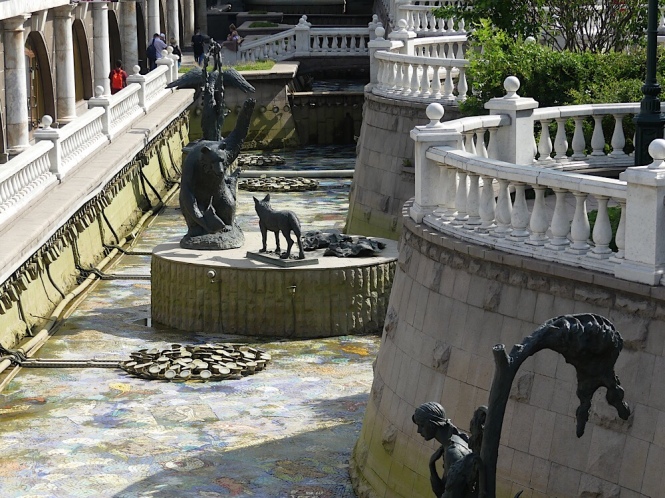 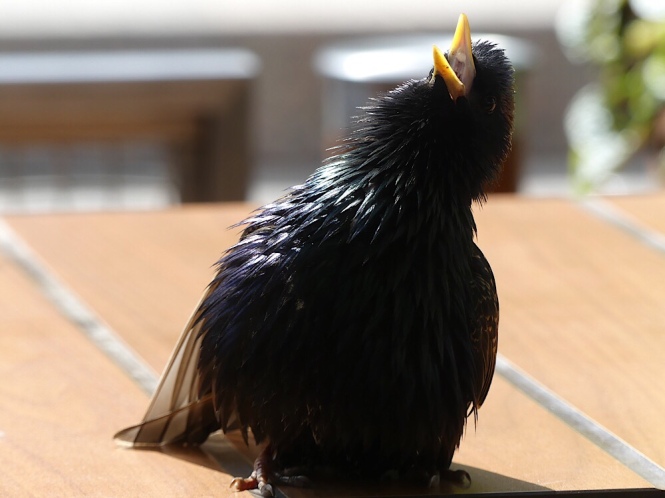 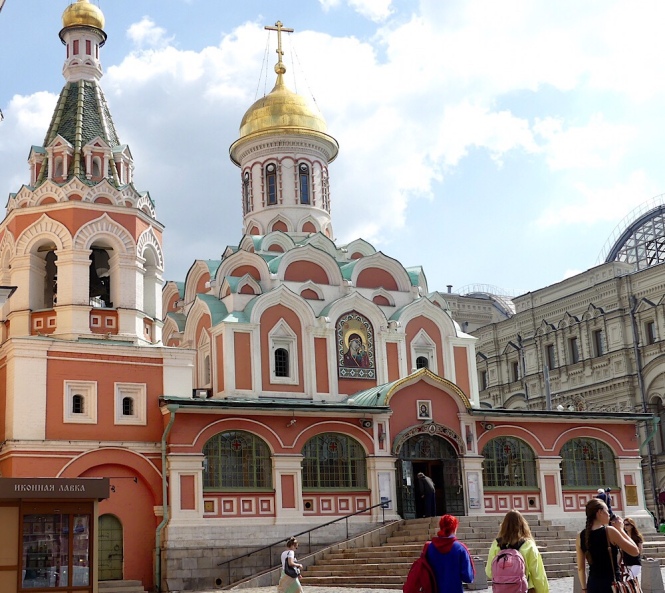 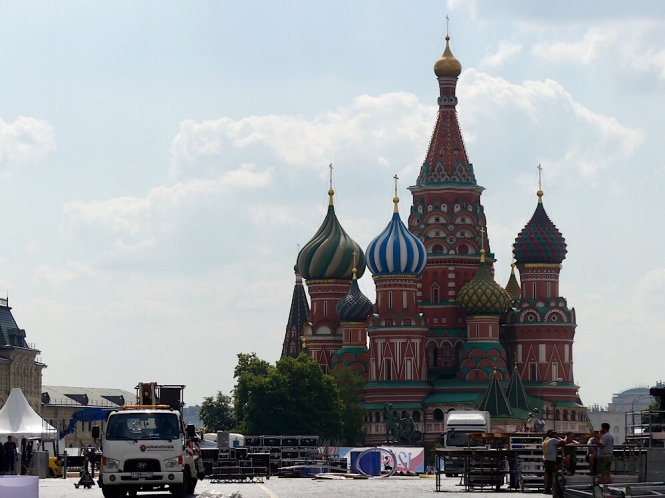 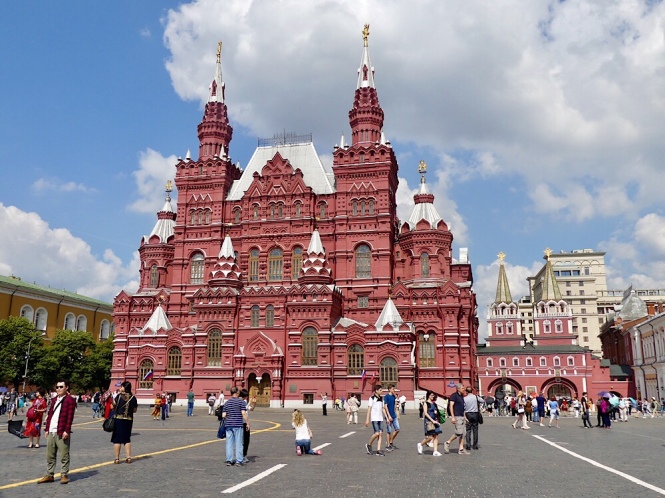 Just off of Red Square is a pedestrian street lined with shops. The decorations were sparkling in the sun. It was really beautiful; my pictures do not do it justice. I found a set of Putin matryoshka dolls; I was tempted but did my usual and cheaped out. I have quite a few souvenirs from our last trip to Russia in 2010 so didn’t feel too compelled to buy anything. 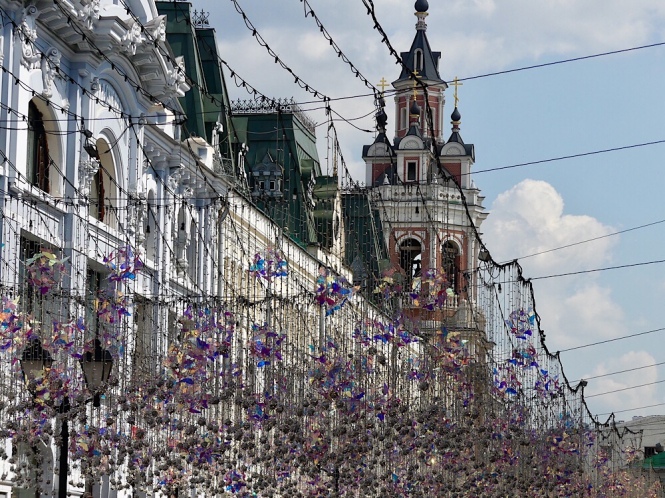 We greatly enjoyed having a day free to sightsee on our own. It was a most welcome break.

The following day we had to leave the hotel at 5:30 am in order to catch the train to St. Petersburg. The high speed train was very pleasant. I slept for most of the ride. It was so smooth in comparison to the other trains we have been on.

We got to the hotel around 11 am and were pleased to learn that we would be able to check in immediately. We informed our tour manager that we would be skipping any further tours with the group. There was a 3-hour walking tour scheduled but I knew I couldn’t manage it. And, this is my 3rd trip to St. Petersburg so I have already seen all of the sites. And, to cap it off, we will be returning in a week as part of our Baltic cruise. So, no reason to push it. I’d rather take it easy and rest my back so that we can enjoy our upcoming cruise.

We did our own “walking tour” the following day. Our hotel was located near Nevsky Prospect, the main drag, so most of the main tourist sites were located within a couple of miles from where we were staying. We stuck with walking around rather than going in to any of the sites. By now, we were very weary of crowds and since we have been here before (and will be here again) we decided to just take it easy. 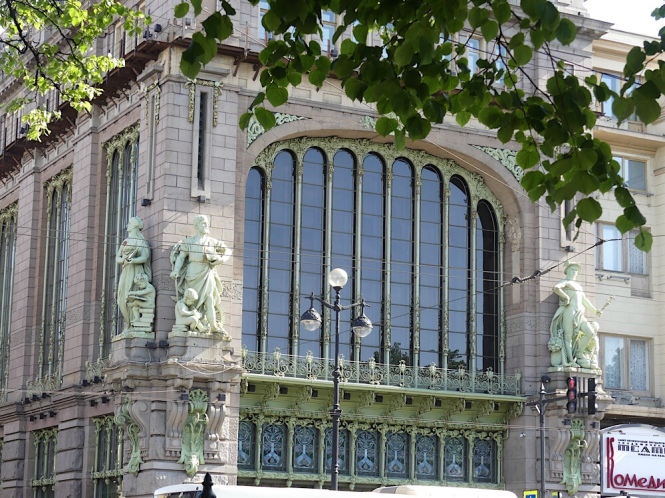 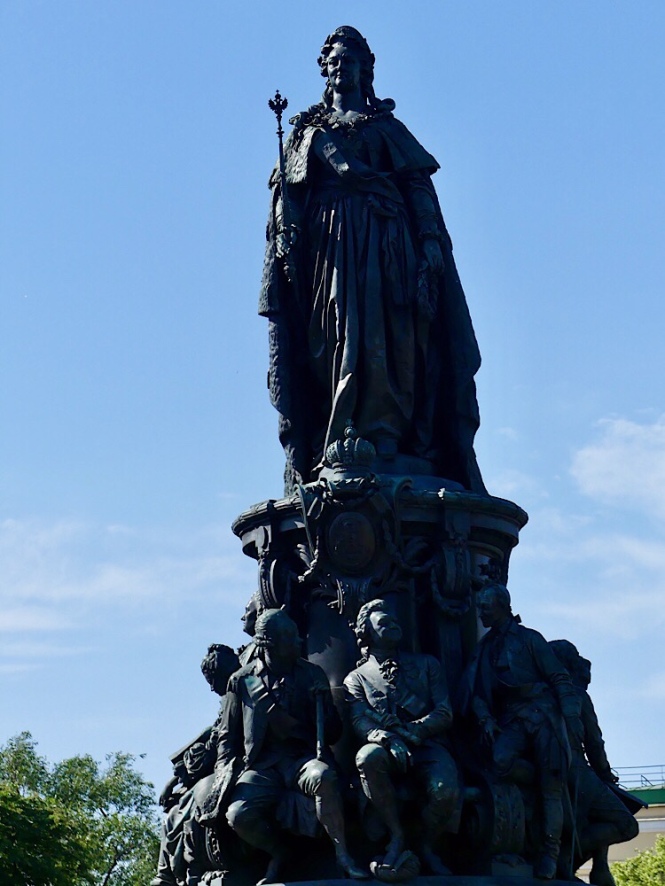 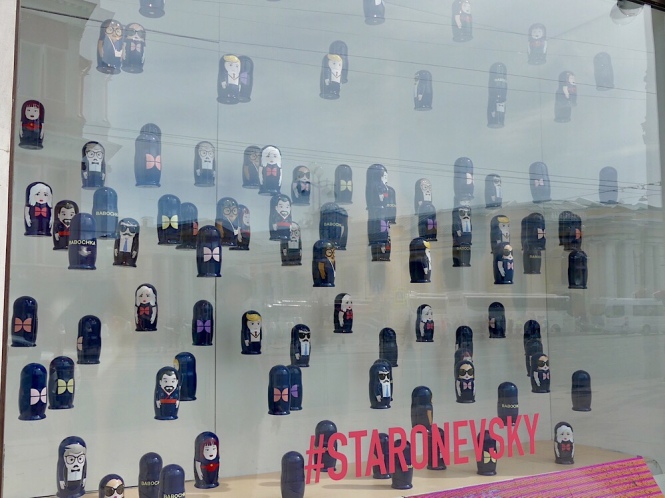 So, we have now wrapped up our crazy Trans-Mongolian experience. It was a once in a lifetime trip. In other words, we would never do it again! I should never say never; who knows what the future will bring? But, if we were to do this again, we would definitely not do a group tour. If nothing else, the two-week China tour and the Trans-Mongolian tour did nothing if not reinforce that we are not group tour people. We much prefer to do things on our own at our own pace. We are looking forward to a couple of weeks of cruising the Baltics and Norwegian Fjords.