Our plan for the day involved catching the earliest possible bus to the Fortress of the Bear, located a few miles outside of Sitka and then returning to town to walk around and see the sites. The Fortress opened at 9 am and the bus left downtown Sitka at 8:45 am. There were a couple of places we might end up docking in Sitka but we assumed we would be in town because NCL had said nothing about a shuttle into town. We figured that if we left the ship at 8:30 that we would have enough time to find the bus stop. Our cabin is located on the starboard side of the ship. When we looked out our balcony we could only see water so had no idea where we were in relation to town.

It’s a very good thing that my husband insists on being early for everything. We left our cabin before 8:15 and exited the ship to find that we were not docked in town after all. We would indeed need to take a shuttle bus; our dock was located over 5 miles from the downtown area. Our bus driver told us a bit about Sitka on the drive in. Sitka is one of the larger cities in Alaska with a population of 8800. It was originally inhabited by a Tlingit tribe 13,000 years ago. The Russians settled here a couple hundred or so years ago because the area was profligate with otters. Otter pelts were highly prized so the Russians that settled here thrived. The Spanish inhabited the area briefly as did the British, but the Russians eventually returned to power. The Russians booted the Tlingit tribe out of Sitka for a period of 15 years. Many tribal members relocated temporarily to Ketchikan. Eventually the Russians sold Alaska to the US in 1867 for a price of $7,000,000. There are strong Russian and Tlingit influences evident. Sitka is celebrating its sesquicentennial this summer.

We were dropped off at a large visitor information center. The bus driver told us to walk toward the main street and look for the yellow sign indicating a bus stop. We couldn’t find the sign so asked in a store. The cashier directed us back towards the visitor center where the bus stop was supposed to be located. We never did find the bus stop but saw the bus stopped at a traffic light. We waved to the bus driver who opened the door to let us know that she was off work but that the bus behind her was the one we wanted. We pounded on his door and he very nicely let us in! Not strictly legal to let us in while he was stopped in the middle of the street, but it worked! We really didn’t want to miss the bus like we did in Ketchikan; it would’ve been another hour until the next bus came along. If you visit Sitka and want to visit the Fortress of the Bear, consider taking public transportation. One caveat – the signs are not yellow; they are white with red trim. No wonder we couldn’t find a yellow sign! Anyhow, the senior rate is only $1 per person; regular rate is only $2. The bus driver was very friendly and informative. We chatted with him along his route. Our destination was located about 7 miles from downtown Sitka. The actual bus stop was down the hill a bit from the entry to the Fortress but the driver dropped us off near the entrance. He let us know that the bus would be along at 15 minutes past the hour and showed us where he would pick us up.

As we were paying our entrance fee we saw the first tour bus pull up. If you are visiting here, try to get there as soon as possible to 9 am, before the buses start to arrive. We were only the 2nd or 3rd couple to enter so had some fabulous opportunities to view the bears without it being crowded.

Fortress of the Bear is a haven for orphaned bears. Eight bears live here; 3 black bears and 5 brown bears. Two of the black bears are sisters. The state of Alaska Department of Fish and Game has a policy to shoot orphaned bear cubs so this is the only alternative at this time for these bears. They are not able to release the bear cubs back into the wild, either, due to state regulations. So, this facility provides a home for bears that would otherwise have been killed. The hope is that the state of Alaska will change their policies and eventually the bears can be restored to the life they were meant to live. If you are interested in learning about their program, the website is www.fortressofthebear.org.

The Fortress is divided into three areas. You can get within 25 feet of the bears; they live in a very natural setting. There are two interconnected areas for the brown bears and one for the black bears. When we arrived, two of the black bears (probably the sisters) were play fighting. One of the employees, Chris, talked to Clayton and me about the bears and about how each ended up there. He talked to us about how they are cared for and about the personalities of each bear. He tossed some fruit (apples, oranges and strawberries) into the water in the black bear area. The bears ambled over to grab the fruit and a raven picked up one of the apples to eat! I was pretty impressed that the bird could pick up a large apple in its beak. After it pecked off a few bites, one of the bears grabbed the apple away from the bird. Speaking of birds, the feeding attracted several eagles (5 altogether). They came flying in from all directions and perched above the feeding bears. A couple of the eagles did were kind of a spotty brown. Chris told us that bald eagles look like this until they are about 2 years old. By then, they have the typical markings of having a brown body and white head and tail feathers. None of the eagles tried to steal food from the bears but kept an “eagle eye” on the proceedings. 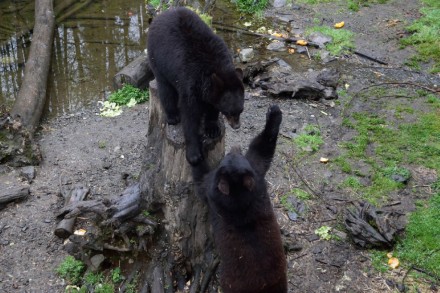 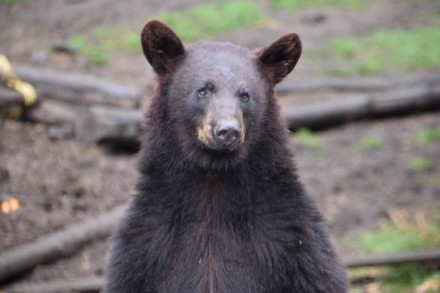 We watched the brown bears play for a while. I love the brown bear that was sprawled against the tree! As you can imagine, I took many, many pictures! I am posting only a few here; I will post the remainder on my Facebook page (when I get time). If you are interested, you can take a look (Heather Griffin Phillips on FB). 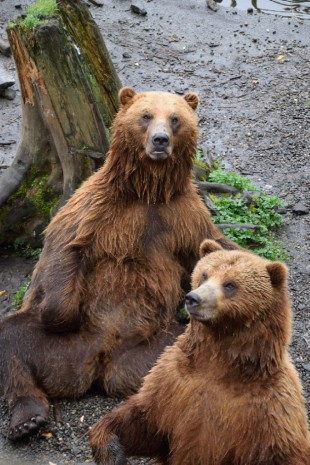 We headed back to the bus stop at about 10 am. While we were waiting, an empty tour van pulled up and the driver told us that if we wanted, he could drive us back to town right then. We hopped in and had a lovely drive back to town. The driver was originally from Colombia, moved to Florida for 12 years, and has lived in Sitka for 5 years. He drives bus for the schools during the school year and drives tour buses during tourist season. He was a really nice guy and took us back to the visitor center where we started our day. 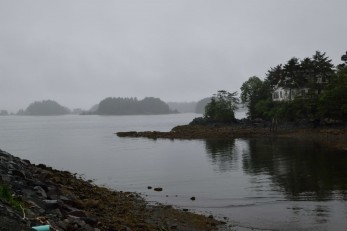 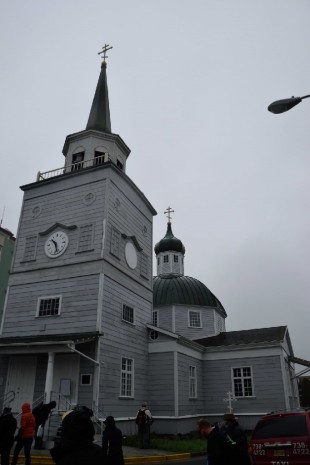 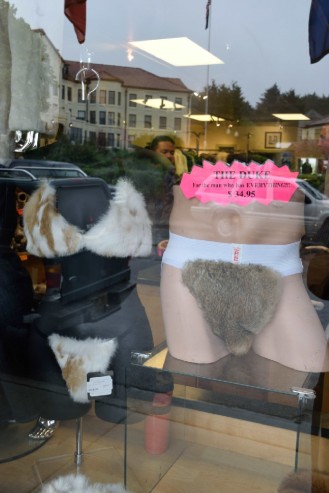 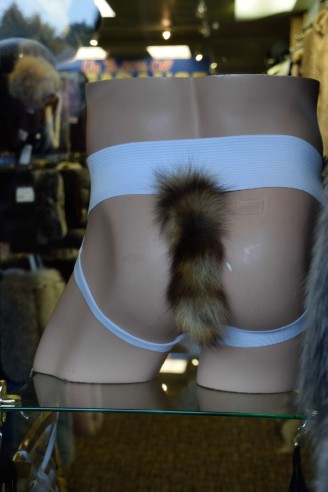 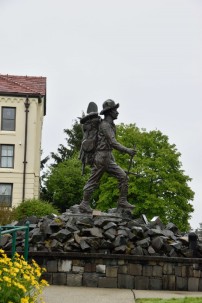 We walked around town and did a little shopping. Sitka, like the rest of the Alaskan ports, is very compact and walkable. It is a charming town; one of my favorite ports from this itinerary.