For a nice change of pace, we took an excursion today. I can’t remember why I chose this particular tour, but knowing me, I am quite sure price was a big selling point 😁. The last time we were in Skagway we took the White Pass Railroad and greatly enjoyed it. We did not want to take the same tour again but did want to get out of town; this tour fit the bill and it also included a stop at the Gold Rush Cemetery, which I very much wanted to visit.

The tour started at 8 am; we were to be picked up in front of the ship at 7:45. It was a very cold and windy day; at least it wasn’t raining! Our tour guide was Brandie. She had moved here when she was in school and has lived here since 2001. We started the tour by driving down Broadway which is the main street in Skagway. We drove past the AB building. I have always been curious about this building. It is made up of over 10,000 pieces of driftwood. AB stands for “Arctic Brotherhood” and is a fraternal organization that was founded in 1899. There are also Elks and Eagles lodges here. The population of the town during non-tourist season is about 500; Brandy claimed that it is closer to 300. The name of the town is actually spelled Skaguay. When the USPS came to town, someone with the postal service misspelled the name and since the US government wanted to spell it Skagway, it has been spelled that way ever since! 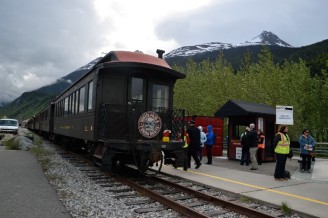 During the summers the population swells to around 2000 in order to support the tourist trade. Many that come in for the season live in RVs. The cost to rent an RV space is around $700-$800 per month; a tent space will run you $450-$500 per month. Don’t get sick while you are here; there are no doctors in Skagway. There are Physician’s Assistants. If you need to be seen by an actual MD you would have to be airlifted to the nearest hospital at a cost of approximately $30,000. If the weather is not conducive to flying, the Coast Guard will deliver you to the nearest hospital for free. There is a school here that houses preschool through 12th grade. There are 98 students. Brandie’s daughter is the only preschooler. She will also be the only kindergartner (unless a new family moves in). Like everywhere in Alaska, food is very expensive. Goods are delivered by plane, road or boat; according to Brandie most groceries arrive by barge once per week. During the winter there are only 5-6 hours of daylight. I asked Brandie what people do during the long winters for entertainment. She said that there were several bars in town that everyone hung out at.

The road we were driving on was built during WWII and paved in 1982. On the left side of the road is the Chilkoot Trail; on the right is the Whitehorse Trail. We would be driving up the road 14.5 miles to the pass, passing through 3 ecosystems.

The history of Skagway is all about the Alaska Gold Rush. I was surprised to learn that the length of the gold rush was only two years. Intrepid gold miners would have to take a ship up to Skagway, carrying with them one year’s worth of provisions. They then had to haul those provisions over the pass. Canadian Mounties would check to make sure they had sufficient goods with them before allowing them in to the Yukon Territory to continue their journey to where the gold was located. The first leg of their journey was about 150 miles to reach Lake Bennett. From there they would have to build a boat to cross the lake, then continue on. The total journey? 550 miles! It was impossible to haul all of their goods in one trip; it could take 4 1/2 to 5 months to ferry all of the goods to their final destination. They preferred traveling in winter; it was easier moving though snow than through mud and rocks that were encountered at other times during the year. Not too surprisingly, many died of hypothermia. As a matter of fact, hypothermia is still the #1 killer in Alaska.

Next was a 3000 foot tall waterfall coming from Goat Lake. As we continued on we passed Deadhorse Gulch, so named because over 2000 horses died hauling supplies up the pass. The goldminers did not anticipate that there would not be food along the way for their horses to eat so many horses starved to death and were left to die along the trail.

We drove over the William Moore Suspension Bridge. This bridge is unique in that it is attached to land only on one end by pavement. It is located on a fault line. There have been a slew of earthquakes in SE Alaska recently. We passed into Canada and reached the summit (3292 feet). This is where Mounties would check to be sure miner’s had their requisite year’s supplies before allowing them entry.

While we were stopped here, someone spotted a bear!Â  So exciting! Of course, I was standing in line for the restroom so didn’t have my camera with me. I can just about guarantee that someone will spot wildlife when I leave my camera in the tour van. . .Fortunately, I was able to run back to fetch said camera and was able to get a few pictures before the bear lumbered off. 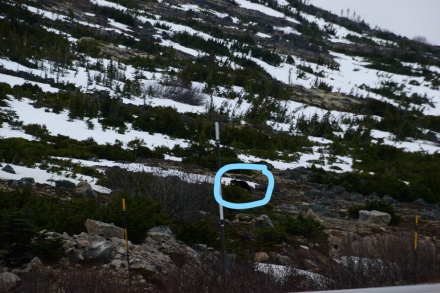 It was time to head back down the pass. We passed back into the US. 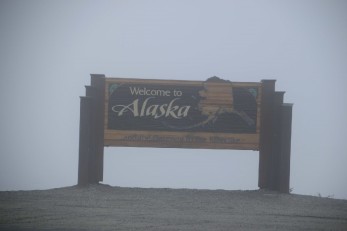 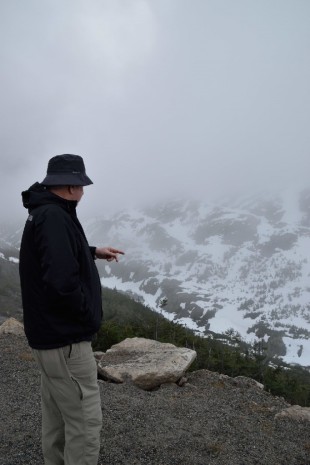 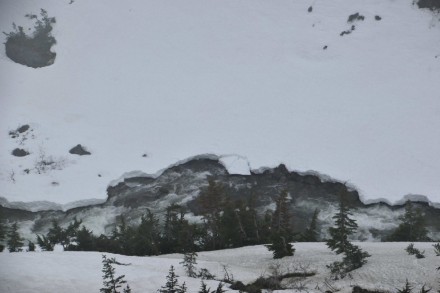 Â And stopped for pictures at Bridal Veil Falls. 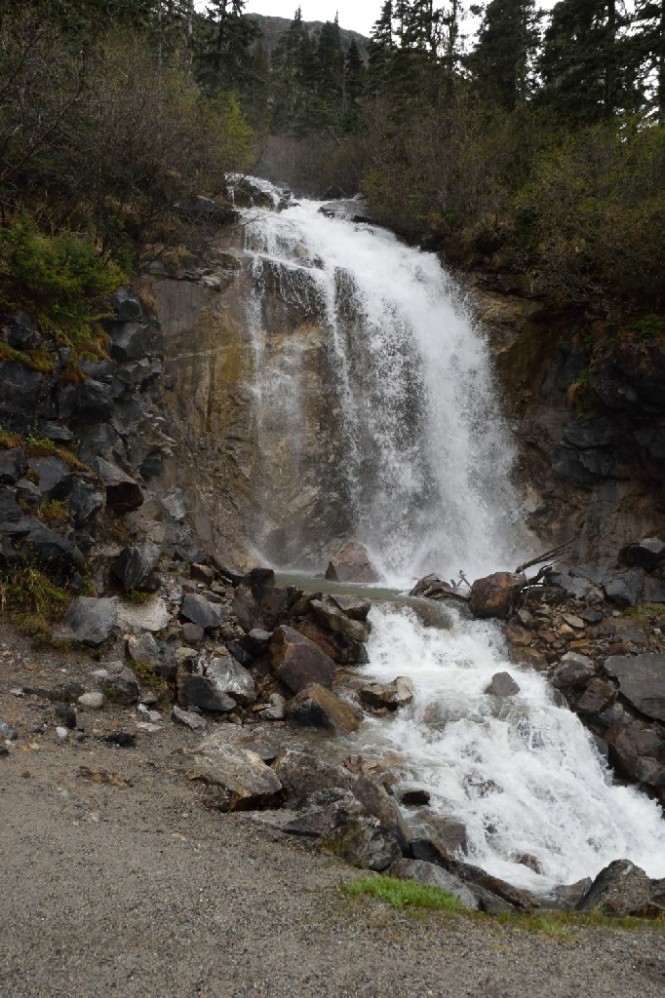 Next stop: an overlook of the city. Skagway is not technically a city; it is a borough. It is only about 4 blocks wide by 22 blocks long. The main industry seems to be tourism. Shops line every street in the main part of town; there are houses in the “outskirts”. All of the buildable lots are taken so the cost of renting or buying a home here is quite high. 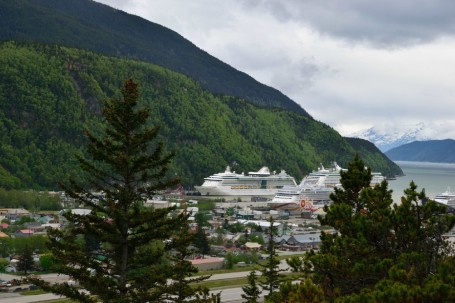 Our final stop before being dropped off in town was at the Gold Rush Cemetery. Located here is the grave of Soapy Smith, a legendary conman that ran a gang of 109 other miscreants. He is famous for scamming miners that came through Skagway on their way to search for gold. He is famous for such scams as setting up a fake telegraph and charging $3 to $5 to send telegrams. Apparently, virtually all who sent telegrams to their loved ones received telegrams in return stating that they needed money. Shocking. Even more shocking is that the telegraph line was about a mile in length and ended in the ocean! He extorted money from prostitutes and was an all-around nasty guy, by all accounts. The town’s people got pretty tired of Soapy and his gang’s antics, so a local named Frank Reid offered to kill Soapy. He and Soapy shot at each other. Frank hit Soapy right through the heart and he died instantly. Frank was not so lucky; Soapy hit him in the groin. He spent the final twelve days of his life in agony in the hospital before succumbing to his wounds. Both are buried at the cemetery. Soapy’s (Jefferson Smith’s) grave is off to the side of the cemetery. His body had been left to rot by the townspeople. The minister took pity and buried him, but would not bury him in hallowed ground. Frank Reid’s grave is the most ostentatious in the cemetery. The inscription reads, “He gave his life for the honor of Skagway.” The remainder of the graves (for the most part) are marked with small white wooden markers that are repainted every couple of years. The majority of those buried here died from spinal meningitis. 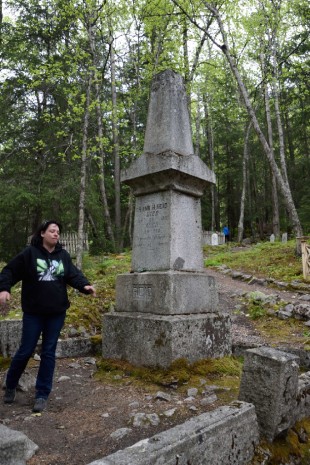 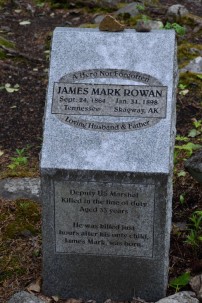 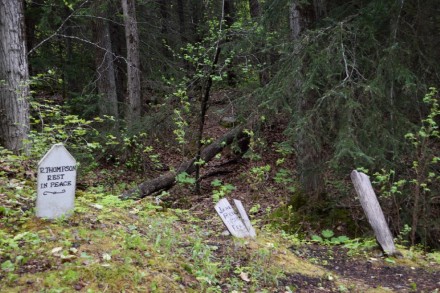 Brandie dropped us off in town for a little retail therapy after our tour. We dutifully tramped through some of the stores but were not tempted into buying anything. The shops are quite similar to those found in the other ports we visited, including the ever lovely fur bikini! We passed by the Red Onion Saloon which was a brothel, back in the day, and has the cheesy signs in the window to draw in the tourists. We peeked in; the place was packed. I guess it is Skagway’s version of the Red Dog Saloon in Juneau. Every Alaska town needs a touristy watering hole! 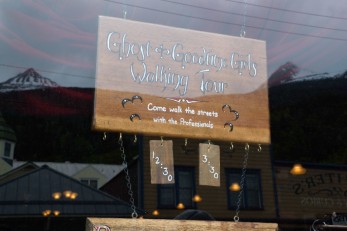