I was very impressed that Hanoi had a museum dedicated to the accomplishments of women! We have traveled all over the world; I think this is the first of its kind that I remember. The museum has 3 floors of displays; each floor has a focus (the ground floor is where the ticket office and museum shop are located).

The top floor is about Women’s Fashion. There are many different tribes in Vietnam. Each has their own way of weaving, coloring, and designing their own style of clothing. There are displays showing different styles as well as displays and videos showing how that particular tribe dyes the cloth they use. Modern fabrics and techniques are becoming more commonplace with the hill tribes in modern society. 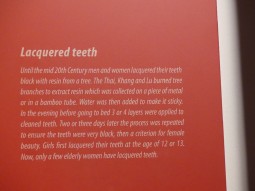 The middle floor is dedicated to Women in History. There were multiples displays honoring the women that fought during the war. I was unaware of just how large a part women played – they were guerilla fighters right along with the men as well as doing the normal supporting roles such as logistics support. Reading about these women, one understands that they were true warriors. Over 50,000 women have been designated as “Heroic Women of Vietnam”. Each lost at least two children, or a husband and at least one child, or perhaps their only child during the wars of the 20th century. 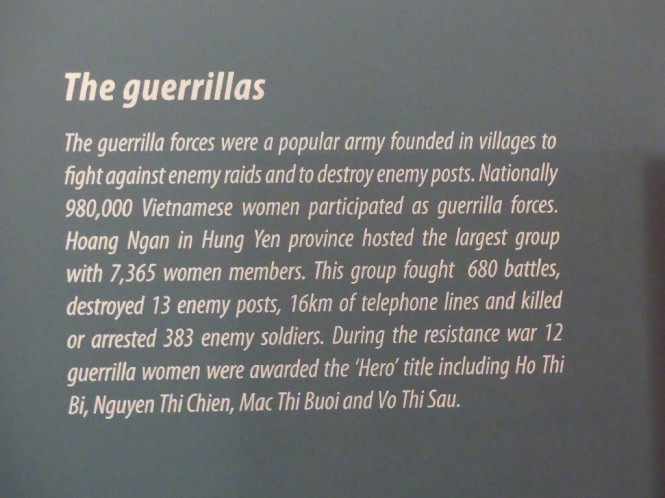 The caps are worn by children in the hill tribes to protect against the cold. Amulets are sown on to protect them against evil spirits.

Part of this floor is dedicated to the Mother Goddess who is worshipped as the goddess of heaven, earth, water, mountain, and forests. Women are seen as the center of the universe. 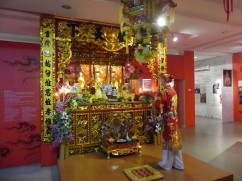 The remaining portion of the museum is related to marriage and childbirth. Each tribe has its own marriage and birth rituals.

In a small room on the first floor, there was a video playing about women that sell fruits, vegetables, flowers, and other products on the streets of Hanoi. One woman was explaining that her husband was a pig farmer and only earned $60 per year which was not enough to support their children. So, she sells flowers in town. She pays 35 cents per day to share a room with 10 other women. She gets up at 4 am to prepare, and starts selling flowers by 8 am. Her day ends when the flowers are gone, typically around 7 pm. It is a very hard life, but it is the only way she and her husband can afford to feed their children.

We learned so much about the life and culture of the women of Vietnam by visiting this museum; it was a fascinating place. Just outside the museum is a courtyard where goods made by women are sold. There was also a shop selling pigs for the upcoming Year of the Pig. 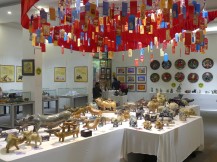 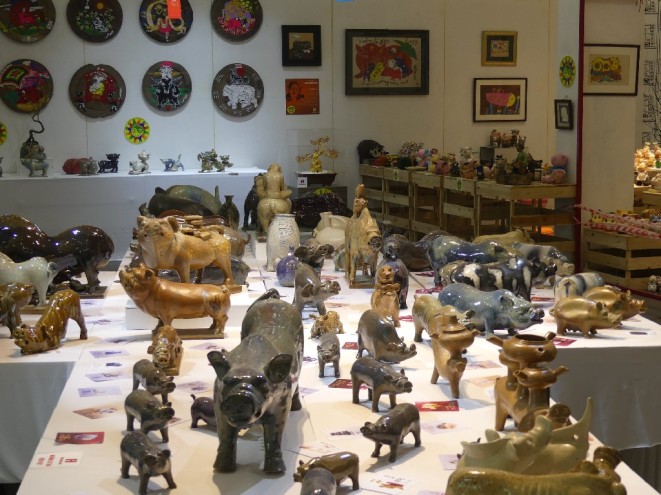